‘Boks win in style against Spain

The Springboks scored five tries on their way to a comprehensive 44-5 victory over Spain at Ellie Park in Johannesburg on Saturday afternoon – a team they had never previously beaten. 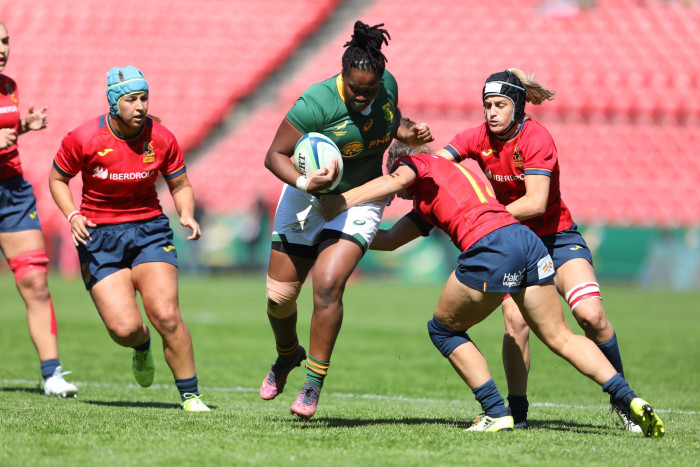 Spain - playing under new coach Juan González Marrueco, and with 10 changes from their last game in February - could only manage a consolation try on the fulltime hooter to prevent a whitewash.

The platform for the splendid win was laid upfront though, where the home pack dominated the visitors in all aspects, with prop Babalwa Latsha and No 8 Aseza Hele outstanding.

The South Africans made the better start with strong carries and powerful surges into the Spanish half. They also gained valuable possession with a couple of good steals on their opposing lineouts.

However, the home side suffered an early injury setback when lock and captain Nolusindiso Booi left the field after sustaining a facial injury and was replaced by Lerato Makua. In the second half they also lost strong runner midfielder Qawe to an ankle injury, with the experienced Zenay Jordaan coming on as replacement for her 32nd Test cap.

Coach Stanley Raubenheimer would have been disappointed with the number of handling errors made by the home side, which prevented them from adding to the scoreboard.

They turned a lineout steal into a successful scoring opportunity when they ran the ball from inside their own 22m, with right wing Ayanda Malinga rounding her opponent to score a converted try for an early 7-0 lead.

Janse van Rensburg, who converted the try, also added a close range penalty goal to take the SA lead to 10-0 halfway through the first half. Nadine Roos, the home team's fullback, then thought she scored under the posts when she was on hand to collect a kick, however, she was called back because of an earlier handling error.

Spain did manage to venture into the SA danger 22m area, but they made some basic errors which made their hard work undone. The visitors also didn’t make it easy for themselves by conceding two penalties inside easy kicking range, which Janse van Rensburg slotted with no easy at all.

Left wing Simamkele Namba then went over the second SA try of the first half after some hard running from the midfielders, who punched a hole in the Spanish defence for the wing to finish.

Spain showed more fight in the second half with the result that the home team found it very difficult to break them down, despite their advantage in possession and territory.

However, with the Springbok Women dominating the gain line, they managed to strike first in the second half when Roos showed deft footwork on the right-hand touchline to run through for their third try of the match.

Later, reserve hooker Roseline Botes was the recipient of an expertly executed maul try as the home forwards continued to pile on the pressure.

But there was still enough time for speedster Malinga to collect a misplaced Spanish kick and beat three defenders to run clear and score her second try under the post for SA’s fifth five-pointer of the afternoon, all converted by Janse van Rensburg.