Canada impress in win over Australia

Canada opened their tour of New Zealand with an impressive 22-0 win over Australia in a game which also ended Australia's brief world cup warm-up series. 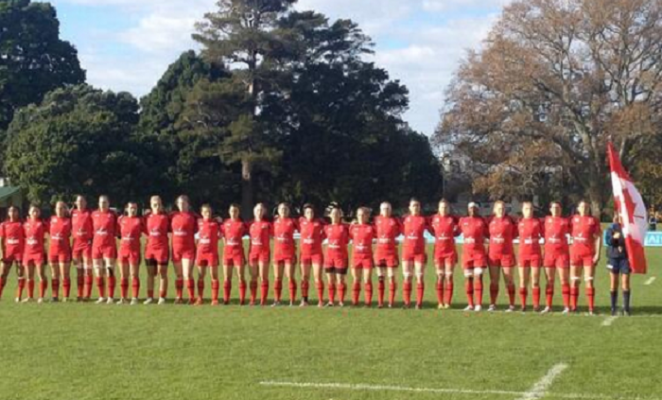 Australia's second a final test on their short tour to New Zealand followed a similar pattern to the first.

A tight opening 40 minutes showed little to choose between the two sides. However, Canada's backs always looked dangerous and it was a fast flowing move that lead to the only score midway through the half with Mandy Marchak unloaded to flanker Jacey Murphy who had the spave but was just unable to take the ball. Nonetheless the resulting Australian scrum on their on five metre line was turned over, and from the following Canadian scrum a drive saw Jacey Murphy getting the touchdown.

After a period of Australian pressure the half ended with Canada on the attack. With ten minutes left in the half Canada had a penalty chance to extend their lead, which went wide, and a great run by Karen Paquin only just came up short.

As the benches began to be used in the second period Canada came more into the accendancy, particularly up front where they seemed to have edge. Andrea Burk had another penalty opportunity, and this time took it to extend the lead to 8-0.

Emily Belchos came on for her first Candian cap and was soon in action as Australia fought back. Some great defensive tackling was followed by speed of foot as she chased down a dangerous Australian kick deep into the Canadian half, just winning the race and saving a possible score.

As in the previous test, the crucial moment was a yellow card, this time for their impressive full-back Ashleigh Hewson for a high tackle. From the resulting play again power of the Canadian forwards was decisive with a drive allowing Jacey Murphy to get her and Canada's second try, this time convered by Magli Harvey.

Australia's response was immediate and had them camped out in the Canadian half for an extended period. However, Canada's defence held until Julianne Zussman finally broke the line to relieve the pressure and take play back into the Australian half. Good work by the forwards took Canada to within 10m of the Australian line before Emily Belchos started the move that lead to the final score of the game, the ball finding its way to Julianne Zussman who offloaded to captain Kelly Russell for Canada's third try and a final score of 22-0.

Canada therefore get a perfect start to their tour, which will continue with back to back tests against World Champions New Zealand.

For Australia, this was the end of their tour which has seen them introduce test rugby at the highest level to fourteen new players, which will be important for their World Cup campaign which begins in less than two months time. However on the debit side - and despite good starts in both tests - the tour has ended with two defeats, no tries, three points scored, and sixty conceded, over half of which came in the final quarter of the games. In addition there were three yellow cards, at least two of which were followed by crucial scores that changed the complexion of the matches.

Paul Verrell was reflecting on several on these points after the game:

"I thought the three debutants were excellent for their first game at Test level. Over the two games in New Zealand, we have given debuts to 14 players which should stand us in good stead in the coming months and years ahead."

"Today the opening 40 minutes were very stop-start. We put the ball down when chances were created and we just couldn't capitalise when we really needed to. That said, Canada is a well-drilled side who have just come off a Test series themselves. One of our players was sent to the sin bin for a high tackle demonstrates that we need to work on our discipline. It was a bit of a wake-up call and we have plenty of work to do before we head to France in a couple of months.".