Scotland recorded a 38-15 win against South Africa at the City Park Stadium in Cape Town on Saturday, outscoring the Springboks by six tries to two. 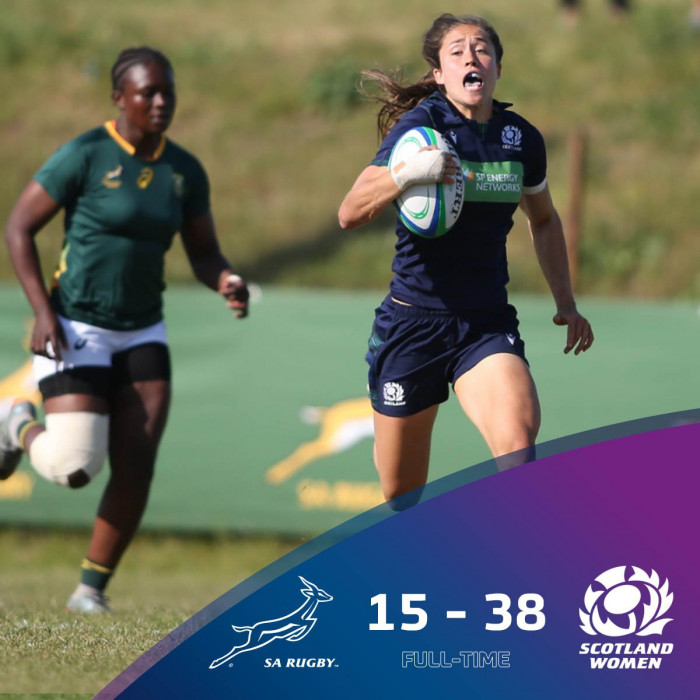 Both teams shuffled their packs a little before the game. Springbok coach Stanley Raubenheimer gave Shuneez van Heerden her debut on the wing, and inclusion that meant Piwokuhle Nyanda moved to the right wing, with Nomawethu Mabenge moving to the bench. Chuma Qawe (fullback), Sesethu Mtshazi (centre) and Unam Tose (scrumhalf) earned their first startsin the backs.

In the pack Annique Geswind started in place of Lindelwa Gwala, and Edwaline Dickson (No 8) came in for Aseza Hele.

Scotland saw four new names in the starting XV. In the pack Siobhan Cattigan started at lock, and Lousie McMillan at flanker. Jenny Maxwell started at scrumhalf, and Abi Evans at right wing – a change that meant Lisa Thomson moved to inside centre.

Coach Philip Doyle explained what the priorities would be before the game. “We will be looking at a little bit of defence to be honest. We were a little but rusty and we got caught a couple of times. We did have a fantastic five minutes just before half time. We held them out and it was a really powerful moment in the game. We just have to shore up a couple of small little things.”

Aided by a strong breeze, Scotland again began strongly and made better use of their chances in the first half, scoring three tries and going into halftime 19-3 ahead with the Springboks only able to score a penalty.

Jade Konkel scored the first points of the match in the 10th minute after some good forward play close to the line, and Sarah Law kicked the conversion to hand them a 7-0 lead.

South Africa managed some good phases and worked their way close to the Scots line, by Scotland’s defence held before forcing a knock-on to turn the ‘Boks over.

Early in the second quarter Lisa Thomson added a second try, and Konkel followed this up with her second and Scotland’s third from more determined play close to the ‘boks line to take the score to 19-0.

South Africa’s only first half points came near then end when they again worked their way close up to the Scots line, this time winning a penalty, that they chose to kick.

The second half was the most competitive of the short tour as, although Scotland were able to add three more tries – the last of which was on the stroke of fulltime – South Africa crossed the line twice with Scotland defending for most of the last quarter of the game.

Scotland began the half by seizing the initiative with Abi Evans slicing through a gap in the home defence for the fourth Scots try. But the Springboks cancelled that out in the 49th minute as Aphiwe Ngwevu (on as a replacement in the centre) scored their first try of the match from a pick-and-go, Tayla Kinsey (also on as a replacement scrumhalf) added the extras.

The hosts continued to fight to add to their score most of the final minutes saw them camped close to Scots line for several minutes, which resulted in one score for Aseza Hele, but it was Scotland who ended the game on a high with a break down the touchline resulting in Lloyd crossing for her second try on the stroke of fulltime, touching down under the posts for a 38-15 victory.

“The result is obviously disappointing, but I am satisfied with the performance and the character the team showed,” said Raubenheimer. “We competed well, our defence was a little better than Monday, although a few errors there once again cost us, and some of the young players came though nicely. We did, however, give away 21 points, which we are not happy about.

“That said, I was particularly impressed with the way the team fought and got better as the match progressed, so it was a good step-up from our last match.

“We learned some good lessons as a team in the last three Tests, and that will bode well for us in the future.”

Commenting on the young talent coming through the ranks, Raubenheimer said: “Our main goal with the Test matches we played this year was to try to build a group of players that we could work with going forward to the 2021 Rugby World Cup.

“Six players who played against Scotland today were Under-20 players, and some of them did well, while others now have a good idea of the demands of Test rugby, which is all part of the learning process.”

The tour was a great success for Scotland, bringing them back-to-back wins for the first time for over 10 years. They will be particularly encouraged by their performances compared to World Cup qualification rivals Spain, who – while winning all of their fixtures – tended to start slowly, whereas Scotland grabbed the initiative in all of their games from the start. They have another two tests – against Japan and Wales – next month to complete their busiest autumn ever before the Six Nations begins early next year.