Wales came from behind for the second week in a row to win their second match of this year's Championship. 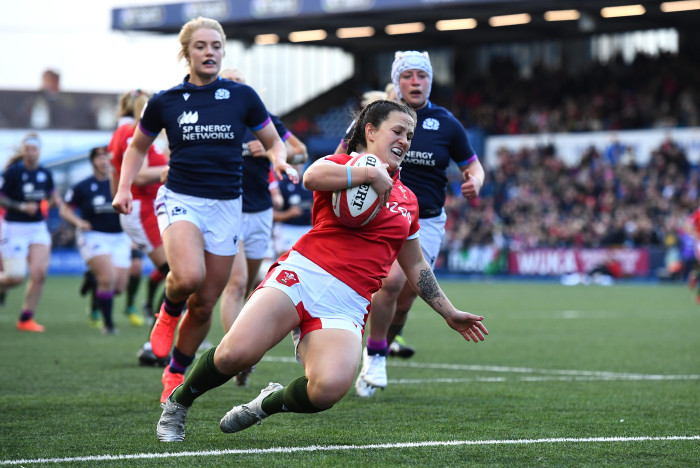 Wales were trailing 19-7 but won it thanks to a brilliant finish from Ffion Lewis' in the 75th minute after a break from Alisha Butchers.

Scotland dominated the early exchanges and winning her 50th cap, Lana Skeldon bashed over just a few minutes in to take a deserved early lead.  The try had come from a well worked driving maul and Helen Nelson kicked the extras.

Wales' scrum was impressive and so was Carys Phillips once again in the front row with her try levelling things as Keira Bevan converted.

Scotland were close to rebuilding their advantage though Emma Orr’s knock-on just a few metres out swung momentum back to Wales.

However, that only briefly halted the visitors' charge, as Wales were unable to deal with the bounce of the ball from Jenny Maxwell’s kick and Lloyd pounced to ground and restore a seven-point lead.

They nearly scored a third, though instead of feeding the ball into space out wide it was played back into the middle before the move ultimately broke down after another handling error.

A late first-half sin binning for Kerin Lake, penalised for not rolling away, gave Scotland a player advantage though Wales held firm and went in just seven points behind.

Scotland made the most of their numerical advantage at the start of the second half, Lloyd setting up the move with a darting run before receiving it again to collect her second of the afternoon.

The hosts struck back decisively with Harries, who had only been on the pitch a matter of minutes, forcing her way over the line to score, Bevan’s conversion drawing her side to within five points.

Momentum was now with the hosts at Cardiff Arms Park in front of a record crowd for women's rugby in Wales and they forced several penalties in their quest to level, though a scrum infringement gave Scotland some brief respite in the 52nd minute.

Wales continued to threaten, though, and a superb run from Bevan powered them 20 metres up field in their quest to level.

And substitute Jones took full advantage, driving over from the maul to score and draw Wales level, though Elinor Snowsill could not give them the lead with the conversion.

After being starved of the ball for around 15 minutes, Scotland finally gained some territory but both teams conceded penalties in a frantic attempt to find a winning try.

However, it was Wales who landed the decisive blow as Alisha Butcher's run opened up space for Lewis who raced over the try line.

Scotland hammered away at the Welsh try-line in the dying moments but they coughed up position within millimetres of the try-line and Wales were able to secure the ball and kick to touch to record their second win of the campaign.