New Zealand have won the Pacific Fours in the wild weather of Whangarei, on New Zealand’s North Island. Canada ended as runners-up. 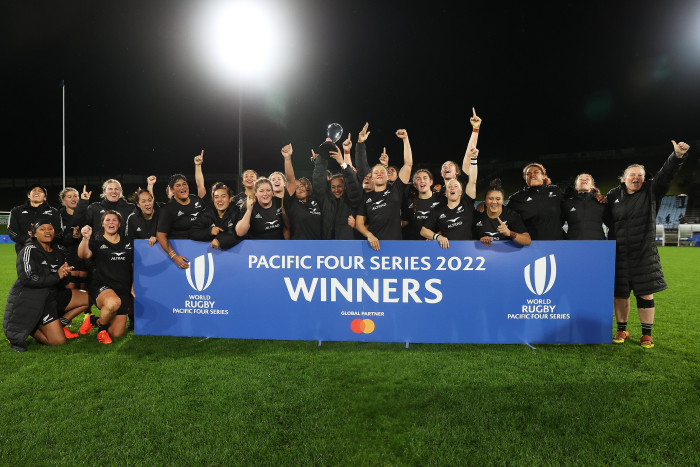 Canada came from behind to beat Australia and take second place in the tournament.

Australia – after losing their first two game against New Zealand and USA – came out of the blocks quickest. Soon after the start a good leap at the line-out from lock Michaela Leonard secured possession for a fine forward drive for the line and hooker Ashley Marsters touched down

The 7-0 lead became 10-0 after 12 minutes when a series of pick-and-go drives resulted in an Australian penalty, which was converted by  Lori Cramer

Soon after this the grey skies gave way to a torrent of rain and strong wind, which seemed to benefit the Canadians.

Two minutes before the break Canada’s hooker Emily Tuttosi finally broke through the Australian defence a lineout maul, after which Justine Pelletier scored a second try four minutes into the second half Canada hit the lead 12-10.

Australia were down a player for the last eight minutes when Madison Schuck was sin-binned, as referee Lauren Jenner finally lost patience after repeated infringements. vA third and final Canadian pick-and-go try four minutes from time followed from Alex Ellis.

“Massive credit to Australia, especially in this rain that was super physical… they came out swinging,” player of the match de Goede said.

Wallaroos skipper Shannon Parry said the adverse 18-8 penalty count and late team yellow card for Schuck were costly. “Our discipline let us down. We obviously came out very strong but in that second half we gave away too many penalties and Canada is a quality team and they made us pay.”

“We’ve taken a lot away from this tournament,” Parry continued. “We are a young group and we have learnt a lot that will hold us in good stead come World Cup towards the end of the year.”

The Wallaroos now prepare for back-to-back Tests against the Black Ferns in August.

New Zealand winger Ayesha Leti-I’iga scored a hat-trick as the Black Ferns continued their preparations for hosting the World Cup with an emphatic 50-6 win over the United States to wrap up the Pacific Four title.

Leti-I’iga crossed for her first try in the opening minute and six more followed from the home side despite rainy conditions.

The Black Ferns would have slipped outside the top two in the world rankings for the first time with a loss to the Americans but that never looked likely after scrumhalf Arihiana Marino-Tauhinu crossed for the second try after six minutes.

Marino-Tauhinu, playing her eighth Test, took Player of the Match honours for her performance, which included the neat inside pass that set Leti-I’iga on her way to her third try in the second half.

“I think the squad has gelled really well under our new coaching administration and you can see that out on the pitch, the girls really want to keep playing regardless of the conditions,” said captain Ruahei Demant.

Former All Blacks assistant coach Wayne Smith was brought in as director of rugby after the touring Black Ferns were heavily defeated in four tests against rising powers England and France late last year.

Smith will not have been pleased with the malfunctioning lineout on Saturday but knows he will be able call on some more experienced players, who were rested for series, when the Black Ferns go for a sixth World Cup title later this year