England have won their three match Old Mutual Autumn series against Canada – and introduced a raft of new stars to international rugby. 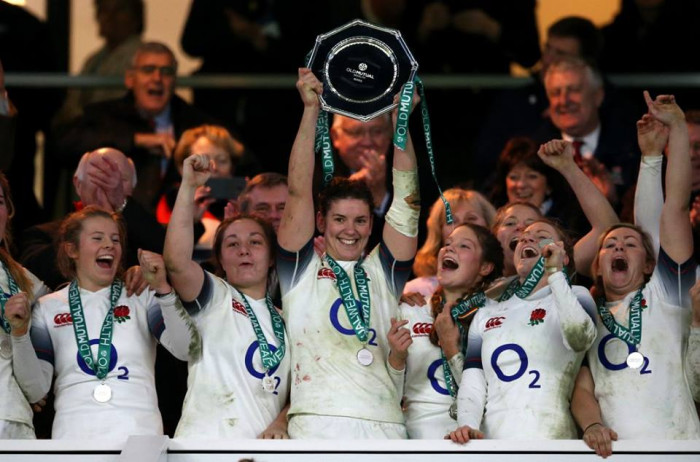 England achieved all of their aims at the end of their series with Canada over the past eight days. Played to a timetable to matches the group stages of the World Cup, the not only won the series against a challenging Canadian team that is far better than the scores suggest, but also gave players likely to be the stars of the 2021 World Cup (and maybe the 2020 Olympics) their first run out in an England shirt. The women’s rugby world outside England may not have been too aware of the names Abigal Dow, Jess Breach and Ellie Kildunne – but they know who they are now.

It’s also been a learning experience for Canada as well as they too aim for 2021 with a team featuring 14 players previously untried at test level.

Around 12,000 stayed behind after the men’s international for the test. Canada’s scrum remained as solid as ever, but in all other areas England began as strong – if not stronger – than in the first two games. Within four minutes Jess Breach was looking ominously good – just held back from scoring the opening try by a desperate handful of shirt. But a minute later Canada could find no answer to an English 5m lineout and maul, and the home team were ahead, Marlie Packer credited with the score.

Katy Daley-McLean converted from near the touchline at the start of what would be a near faultless kicking performance and just six minutes later she put in a near perfectly weighted kick to put Abigail Dow in for England’s second score. 14-0 after 11 minutes.

Four minutes later, and Jess Breach opened her account for the evening, Canada giving her a hairsbreadth too much room and England were 21-0 ahead after just 16 minutes.

But Canada were not going to roll over. Their powerful pack has had little opportunity to show its attacking strength within England 5m line, but given the chance after 18 minutes they came away with points, Olivia DeMerchant burrowing through the England defenders to score.

Canada had been criticised for running too much from defence, due perhaps to a lack of confidence in their kicking. It was noticeable that they were trying to kick more often, but an error set up England’s fourth try. A clearance kick going straight out brought England a line out on Canada’s 22 which proved to be the base for move brilliantly finished Abigail Dow. 26-7.

Dow was now everywhere. Shortly after her second try she was on hand to take a pass from Waterman that completed her hat-trick, after which she show some brilliant handling to keep an attack going that almost culminated in her fourth try from her own kick ahead. But the final score of the half would come from Breach, England going in 38-7 to the good after an excellent opening 40 minutes.

The second half, however, opened quite slowly for England and it was Canada who briefly came into the ascendancy. Belchos’ pass just short of the line narrowly failed to go to hand, but soon after a great break by Janna Slevinsky put in Pamphinette Buisa for Canada’s second try.

After 10 scoreless minutes England resorted to their maul to get the board moving again, Abbie Scott getting the ball down as England drove over.

A break by Janna Slevinsky for Canada could only be stopped by a high tackle from Ellie Kildunne, resulting in a penalty try and a yellow card for Kildunne just before the hour. However, being down to 14 players seem to cause England few problems. Jess Breach completed her hat-trick five minutes later, and added a personal fourth – her best of the game, with her speed, footwork and change of angle taking England to 59-19.

With England back to full strength Breach added a fifth try five minutes later, before Kildunne ended the game with a final score in the 80th minute.  Final score – England 69, Canada 19.