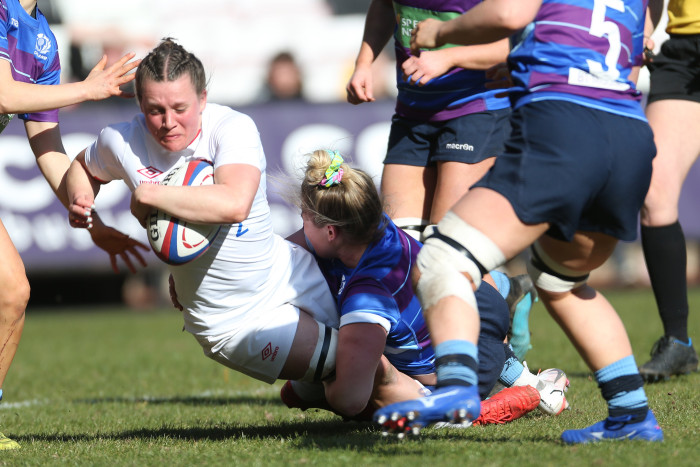 England U20 were comfortable winners against Scotland on Saturday, but the outcome was much closer than the only previous U20 game between the two nations almost exactly 11 years ago.

That previous match saw an England side that featured future internationals such as Amy Wilson Hardy, Abbie Scott, Alex Matthews and Leanne Riley beat Scotland 77-0, who themselves fielded future stars such as Hollie Davidson, Lana Skeldon and Hannah Smith.

It will be interesting to see how many of this weekend’s players go to have full international careers.

Scotland had most of the early possession, but it was England who scored first after 11 minutes, Maisy Allen being hauled down short of the line, but England kept it with their forwards and squeezed over the line from close range. Lizzie Duffy adds the extras.

England make a break from the kickoff with the ball was spun wide to Holly Thorpe on the right wing breaking a couple of tackles and diving over for England's second.

Scotland went in the attack again, patiently going through the phases, but again could find no way through the English defence. But after a series of handling errors on both sides, England won a scrum 35m from the Scots line, from which they were able to set up Thorpe for her second try. England now lead 19-0 after 29m.

From the restart England added their fourth. Abi Kershaw making a break from full back into the 22 before spinning it wide. Good hands from the backs set up Maisy Allen and England lead 26-0 afetr 33m.

Despite more Scots possession it was England who ended the half with a fifth score, Kershaw taking advantage of a turnover to send England in 33-0 ahead.

Both sides made changes at the break, and it was not until the 53rd minutes that England added another score in the corner to lead 38-0.

Scotland made it to the England 5m line, but England defended the lineout well and cleared well through Ella Lovibond. In the 67th minute Scotland made it across the England line, only to be called back for a forward pass. Then with five minutes to go a Scots kick ahead saw their winger taken out off the ball, and after consultation Scotland were awarded a penalty try.

With thanks to Darlington Mowden Park for their excellent Twitter feed!