Canada win gold at the Pan American Games in Lima – retaining the title won four years ago in Toronto – but Colombia make history. 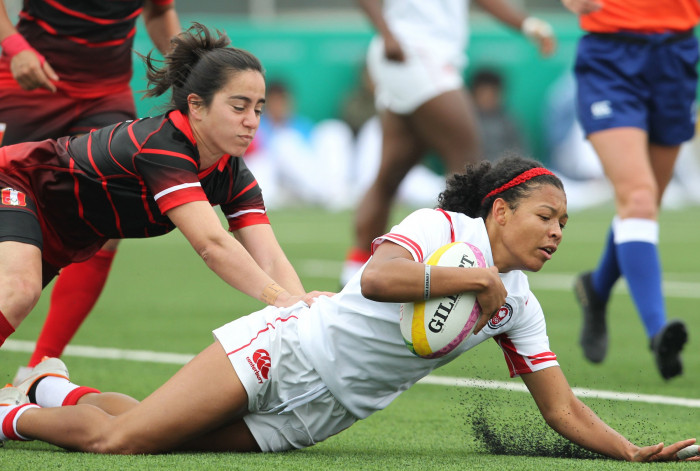 The three days of the second Pan American Games championship ended today with a sensational climax.

The expanded eight-team tournament had, over most of the three days, gone as expected. The opening games of the tournament, between Colombia and Argentina, was the only pool game that was close, Colombia recovering from an early Argentine try to race to a 24-7 lead until Argentina scored from the final play.

It was a result that put Colombia into the semi-finals, and Argentina into the competition for minor places. They were joined in the final four by Brazil as runners up in Pool B, and Canada and the United States, who won their pools without conceding a point.

Canada swept into the final with a big win over Colombia, and the United States joined them though they did concede three tries to Brazil.

And so to the medal matches. Brazil took on Colombia for bronze, having never lost to South American opposition in major tournaments in 15 years and over 100 matches. Recently promoted back to the World Series they were clear favourites and raced into a two try lead in the first three minutes. Colombia came back at them and tied the score, only to concede a third try to Brazil in the final minute of the first half.

Brazil extended their lead to 24-12 with a converted try early in the second half. But again Colombia again came back. First Maria Camila scored with just three minutes to go – but missed the conversion. Then Nicole Jocelin scored from the final play to bring Colombia within two points. Camila this time was on target, and the game was tied at 24-24.

And so to extra time, and a tense three minutes ended with Camila getting the history-making try for Colombia. Brazil’s 15-year run was ended, and Colombia had bronze.

In comparison the final between Canada and the United States less dramatic. Canada opened the scoring in the second minute, USA pulled a try back a minute later, but thereafter it was all Canada, a 12-5 halftime lead being extended in the second half to 24-5, Asia Hogan-Rochester, notching her second hat trick of the weekend, and the United States only getting a consolation try in the final minute.

So ended the Pan American games. Gold for Canada, but history for Colombia