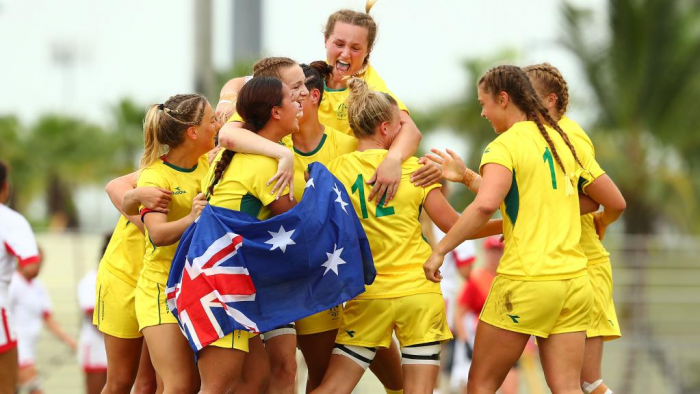 Report: ARU. Australia has won the Gold Medal in Women’s Rugby Sevens at the Commonwealth Youth Games in the Bahamas after a thrilling 31-5 victory over Canada in the Gold Medal match this morning. The next generation of Australia’s Women’s Rugby Sevens talent went through the tournament undefeated after accounting for Bermuda, Trinidad and Tobago, Fiji and Wales before facing off against Canada in the Final.

Emulating the Gold Medal success of the team at the 2015 Commonwealth Youth Games in Samoa, Australia has proven that the future is incredibly bright with the talent coming through in Women’s Sevens.

In the Gold Medal Match the young Aussies got out to strong start with Lily Rose Bennet scoring the first points of the day. Canada countered strongly with a try of their own to level the scores before a try on the cusp of half time to Page McGregor ensured Australia went into the break leading 12-5.

The second half saw the Australians lift both their attack and defence as they kept Canada scoreless despite many attacking raids by the opposition. Two more tries to Lily Rose Bennet, Page McGregor and Georgia Hannaway highlighted Australia’s class and brought the final score to 31-5.

“The Girls were brilliant right throughout the tournament and the way they worked together to win the Gold Medal is a credit to the hard work every player put in. This couldn’t have been done without the work of the State Unions who have continued to develop the Girls around the country before they came to National camp and shows that the future is very bright for Women’s Rugby Sevens.”

The team will return home to Australia where the players in this squad will join the various University sides competing in the inaugural Aon Women’s University Sevens Series due to kick off with round one on August 25.

Wales, taking part in the tournament for the first time, took bronze after an exciting play-off against Fiji, which was tied at 7-7 at half-time before Wales took the game 19-14.

The head coach of the women's sevens team which captured bronze for Team Wales at the Commonwealth Youth Games has spoken of his pride at their achievement.

"As a management team, we are so proud of the team," said Jonathan Hooper. "To come away with a medal was testament to the way they have applied themselves not only during last week's competition, but during the months of preparation leading up to it."

In the sweltering heat of the Bahamas, Hooper's youngsters overcame a Day One loss in a competitive match against Canada to bounce back in style against Bermuda (58-0) and Trinidad and Tobago (53-0).

A reverse to eventual winners Australia didn't dishearten them on Day Two. In fact, it spurred them on as they roared back with a 26-7 victory against a very physical Fiji side, against whom Wales would compete in the Bronze Medal Match on Day Three.

"it was a thrilling final match, and I can't praise the players enough for the amount of effort they put into that last game," Hooper said. "They were fearless and determined to win, never giving up."

With the scores locked 7-7 at half-time, there was then a 30-minute stoppage for injury. When play restarted, Fiji went up 14-7. Wales then showed they were made of stern stuff, equalising with just a minute to go.

"We reclaimed our restart, hammered their try-line and eventually manufactured a try out wide after the buzzer had sounded to win it," described Hooper. "It was such a proud day for everyone involved. It was also great to have the support of some of the parents and Team Wales officials cheering us on from the sidelines."

Hooper lauded the professional conduct of the girls throughout the competition, calling them "great ambassadors not only for Team Wales but for Welsh rugby." Following the conclusion of the sevens, his team were eager to support the rest of the Team Wales athletes competing in swimming, boxing and tennis events.

"The Commonwealth Youth Games was a great learning experience for us all and bodes well for the future," Hooper said. "To play at that level of physicality and intensity in such high temperatures over three days is something that the girls hadn't experienced before and their future development will be a lot richer for it."

The players will be back in training as Wales Women U18 Sevens next week, as they look ahead to their next competition in September, the UK School Games, before delving back into Rugby Europe a fortnight later.