The second round of the 2014-15 Women's Sevens World Series takes place in Sao Paulo, Brazil, from 7-8 February. Watch this page for squads and other news, as we receive it. 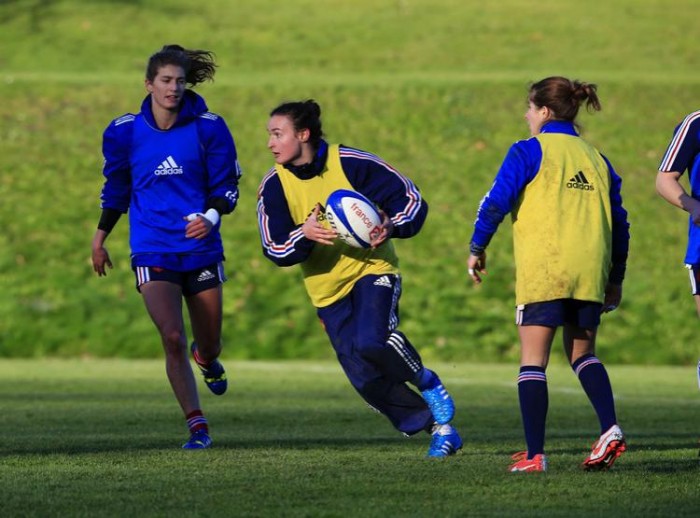 Shannon Izar (France) prepares for the second round of the WSWS

Australian Coach Tim Walsh has made one change to his squad - Nikki Etheridge returns to the squad in place of twin sister Gemma, who injured her foot in training earlier this week. Chloe Dalton has been passed fit after recovering from a fractured arm sustained in Dubai in December, while the uncapped Taleena Simon will travel with the squad as 13th player. Brooke Anderson and Nicole Beck (both shoulder) are unavailable through injury and are unlikely to play again this season.

Australia won the Sao Paulo leg last year. "We loved everything about Brazil last year and while we look at that fondly", Tim Walsh said,"but that tournament is in the past. We saw back then that the weather can be very unpredictable in Sao Paulo – one day extremely warm, the next heavy rain so in that regard the unseasonal heavy rain we’ve had in Sydney the past few days should stand us in good stead."

“I believe I have picked a squad that has a nice balance to it and will excite people watching both on TV and in the stadium in Sao Paulo. In my opinion, it is a side blessed with pace, skill and power – but ultimately it is up to all 12 players selected to prove it on the pitch against high quality opposition.” Walsh added: “I felt we played some of our best Rugby as a playing group in Dubai last month and we have left no stone unturned as we work towards Sao Paulo and hopefully taking another step towards a top four finish that will secure automatic qualification for the 2016 Rio Olympics.”

Canadaian coach John Tait has announced three changes to his lineup from Dubai, with two players set to make their debut - 20-year-old Nadia Popov and 18-year-old Charity Williams. Popov was part of Canada’s gold medal winning team at the 2014 FISU Women’s Sevens Championship and has spent time with the Maple Leafs, while Williams was named in the Canadian Youth Team that finished in second place at the 2014 Youth Olympic Games in Nanjing, China.

“Nadia and Charity have both competed hard to get selected, they are very talented physically and have been growing more consistent and confident with their skills,” said Tait. “I am sure they will be nervous stepping up to a series event competition but I am very confident they are more than capable as they have been competing with one of the best teams in the world each week at training for the last two years.”

Williams will not be the only teenager as she will be joined by  18-year-old Hannah Darling. Unlike Popov and Williams, Darling does have some senior team experience having made her series debut last year in Guangzhou. She was also the captain of Canada’s team in Nanjing.

While there is much at stake this year with Olympic qualifying, Tait believes it is still important to be developing his younger players. “We have to use the series as a gauge to see where they are at performance wise because that is the ultimate test for any player,” said Tait. “I expect them to make some mistakes but what I am looking for is how quickly they bounce back and learn from them.”

All three changes to the team were made based on performance from their training camp in San Diego earlier this month as well as recent team matches. “Of course you always take into consideration past performance and player trends, but in order for us to improve as a team we need consistency in performance from everyone in the squad,” said Tait. “The squad will settle more as we get closer to Rio but also once we start competing for cup finals more regularly. The gap between the bottom-half of our roster and training group has shrunk significantly and iIt has become a headache for selection, but more importantly it gives us solid depth moving towards Rio and will keep complacency out of our group.”

On 27th January English announced a list of 14-players who will travel to Brazil ahead of the tournament. After a week of training the party will be reduced to a 12-player squad for the tournament itself.

England Head Coach Simon Middleton, who has made four changes to the squad, said: "The majority of this squad were in Dubai but it is important to have some squad rotation and it is great to welcome Katy, Natasha, Sarah and Marlie into the fold.

“Katy is obviously a world class player so it is brilliant to have her experience while I will be looking to Natasha to bring us some of the x-factor we were missing in Dubai on the wing. Marlie and Sarah are, meanwhile, very experienced players.”

England will play South Africa, Canada and Russia in the pool stages at the Arena Barueri in Sao Paulo before hoping to better a Plate finish on day two.

Middleton added: “We have made a lot of progress since competing in Dubai. That was a really tough competition. I have to say we did a lot of things right, like winning our pool and beating Canada convincingly, but the one game we got wrong was the quarter-final and that was pretty significant. Since then, we have being doing a lot of work on ‘Game Four’ and we are hoping that will make the difference this time around.

“The pool stages will be tough again and South Africa is a side that we haven’t played since I have been here coaching. They don’t seem to get a lot of ball but they are very organised in defence and that is a big strength for them. We certainly know what to expect from Canada and Russia and we know we can’t rest on our laurels. We learnt some hard lessons in Dubai and we don’t want to see a repeat of them.”

The 14 players selected are:

Coach Sean Horan is without injured trio Honey Hireme, Carla Hohepa and Alexis Tapsell but nonetheless has been able to name a generally experienced line-up. The exception is Charlotte Scanlan, who will play just her second tournament after impressing during Auckland's win at the national championship this month.

Meanwhile, Horan also confirmed that Lavinia Gould would be added to the 2015 contracted squad, having completed a two-year ban issued by World Rugby (then the IRB) for taking a banned stimulant.She has been cleared to be considered for New Zealand selection but hasn't been included in the squad for Sao Paulo.

"Lavinia accepted her sanction and has learned a valuable lesson," Horan said. "To her credit she has maintained a passion for the game, and she's worked very hard to put herself back into contention."

Springbok Women’s Sevens captain Zenay Jordaan has recovered from surgery to her knee and will lead the team having missed the opening leg of the competition in Dubai in December. The only other change to the 12-member squad that participated in the Dubai World Series is the inclusion of back Siviwe Basweni. They replace Sinazo Nobele and Ziyanda Tywaleni respectively.

“Zenay is a fantastic leader and player. Her experience and play-making abilities will be invaluable in Brazil. She is a key member of the squad and her guidance on the field in the last few months despite being on the sidelines while undergoing rehabilitation has been fantastic."

Dazel was also excited to see what Basweni could offer and said: “Siviwe has been working hard at training and she deserves a chance to show what value she could add on the field. We invited Kirsten Conrad, Nolusindiso Booi and former netball player Sunelle Barnard to train with us and this has raised the level of competition in the training squad. That said it will always be tough to select only 12 players, but we believe continuity in selection is important, while also giving the players who raise their hands at training a chance. We have certainly achieved that while selecting this squad, and I have no doubt that we have selected the best possible squad for this specific tournament.”

Spain called up a group of 18 player for a training camp, which finished on the 25th January. The final 12-player squad will be announced early next week.

The USA have made two changes to the squad that played at Dubai. Kristen Thomas of University of Central Florida will travel with the Eagles for the first time in her career. She joins fellow Floridian and WCAA Dana Meschisi, who will make her first appearance on the circuit this season.

“[Thomas has] good size, good speed, and she’s got a great attitude,” Suggitt said of his newest Eagle. “We’ve had her out here for about a half dozen camps already. We’ve just been monitoring her progress and were fortunate enough to get her out for the last half of her school year.

“She still has her classes that she’s going to take and she’s going to be able to finish off her degree, but that was the biggest concern for all of us – that she was able to do both. She’s been able to do that and we’re happy to have her out.”

Thomas and other prospective Eagles played against the women’s sevens teams of Canada and Ireland, who joined the USA at thei Olympic Training Center for two days of joint training, with the second day featuring full, 20-minute Cup Fina-style matches

“We were trying to get ready so the girls aren’t shocked with the energy systems and how fatigued you might get just from being in the Final,” Suggitt said. “Ireland and Canada are all over that, especially Canada; they’ve been in Finals and know what it’s like. That put us under immense pressure. We’re not consistent so with the change in personnel we needed to get that look and that feel to really see what it was like.”