WRWC continues outside the semi-finals

The focus of the tournament is now on the final four who have qualified for the semi-finals, but the world cup also continues for the other eight teams, each of whom have something to prove. 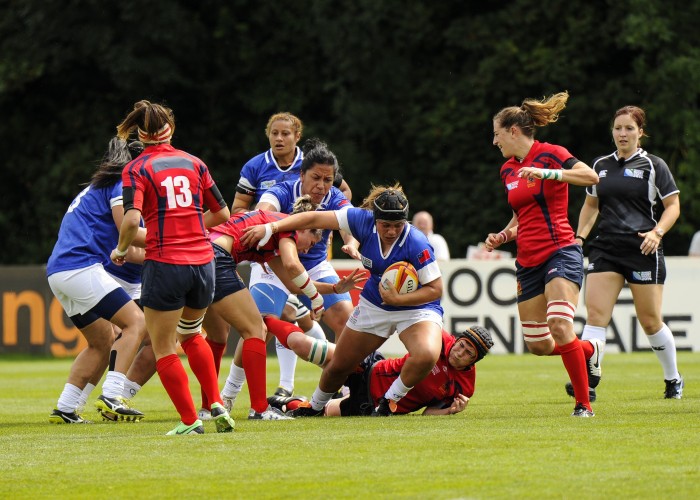 The hors d'oeuvres for the semi-final crowd at Stade Jean Bouin will be the 5th place play-off semi-final between New Zealand and Wales. The two teams start this game in very different moods.

Wales are on something of a high. Regardless of the outcome, this will be their best world cup since 1994 (when they were fourth) and second best ever. Apart from 1994, Wales have never previously finished better than 9th (2002 & 2010) and had not previously won any pool game since 1998.

They make two changes for the game, with Philippa Tuttiett returning to the wing in place of Dyddgu Hywel while prop Jenny Davies starts at loosehead. Megan York switches to the tighthead with Catrin Edwards moves down to the bench.

New Zealand, on the other hand, are in a whole new world. They have never been in a situation where they have not been playing for the title. How they will react will be very interesting to see.

As it is, the idea that New Zealand have somehow lost their edge may be a little premature. In the Pool phases New Zealand scored more points (127) and more tries (20) than any other team. Two New Zealanders (Kelly Brazier and Huriana Manuel) have scored three tries – as has Wales’ Sioned Harries.

"The changes we have made are purely on the back of looking at the All Blacks and how they play,” says Wales coach Rhys Edwards, “and our strategy and the two changes we've made are going to implement that and give us a bit more strength in the combinations we have on the pitch."

The second 5th place semi-final takes place at Marcoussis, with Australia taking on the United States. Both began the tournament with ambitions to reach the final, and both began the last round with a chance of a semi-final place, but both were disappointed. How they will respond to that will make the difference in this game.

Australia go into the game with one of the tournament’s leading goal kicker – Ashleigh Hewson – with six penalties and three conversions. However, the accuracy of her kicking has been vital to Australia as it has accounted for nearly half of all their points scored. In the tournament so far, Australia have scored only six tries, against Wales and South Africa (they failed to cross the line against France). The United States, on the other hand, scored ten tries in their games against Ireland and Kazakhstan.

With two teams otherwise so evenly balanced, that difference in the ability to cross the line is both striking and telling – and may well make the difference between the two teams. Australia, on the other hand, do have a significantly better defensive record – indeed the best in the 5th/8th play-offs – though much of the difference comes from the USA’s defeat 34-3 to New Zealand.

Australia’s most potent weapon often seems to be their highly talented attacking potential of their back line, but the difference between the two teams could well be the Australia’s defence. The teams have met four times in the past, and the United States have won every time.

After a day of highs and lows on Saturday, when – after their impressive win over Samoa – it looked like they would be playing for 5th place, Spain start as favourites to win the 9th place play-offs. They start with a game against Kazakhstan, who they beat 17-12 at exactly the same stage in the tournament in 2006. In fact the 9th/12th place series in 2006 – which Spain won - exactly parallels the draw for 2014.

Spain are at full strength but coaches Ines Etxegibel and Ricardo Martinena have chosen to rotate the squad, resting some players who have had to play three gruelling pool games so far.  María Sequedo and Elena Redondo start at prop, as do Lourdes Alameda and Diana Gassó at second row. Captain Ana María Aigneren starts on the bench, handing over the armband to Paula Medín. Elsa Porto starts at number eight. In the back line Elisabet Martinez and Elena Roca start in the centre for the first time, and Africa Félez gets her first start on the wing.

This may be a risky stategy – Kazakstan are stronger this year than they were four years ago, improving with every game and scoring tries against New Zealand, USA and Ireland – but given circumstances an understandable one, and quite possibly one that Kazakhstan may replicate.

The only previous meeting between Samoa and South Africa was also in 2006, where Samoa were triumphant. Given the improvement in South Africa’s performance since 2006 a win for the Springboks might be expected, but their performance in this tournament has been poor throughout, and has been badly affected by the loss of their captain, Mandisa Williams. They are the only team that has failed to score a try so far.

Samoa, on the other hand, have scored tries against Canada and Spain, only allowing the games to run away from them in the later stages.

If South Africa can refind the form that drew with France and pushed England all the way in the Nations Cup in previous summers then they should win this with some ease, but if they carry on with the form they have shown so far this summer it will be a different story.