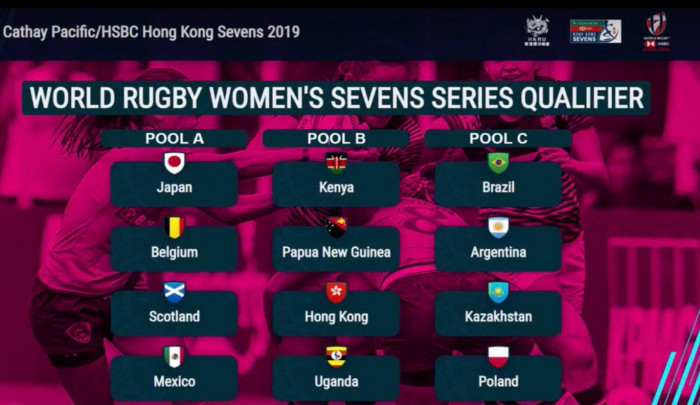 Scotland – making their debut in this qualifier (but certainly not their debut in Hong Kong) have been landed a tough draw in Pool A alongside favourites Japan and European rivals Belgium, as well as Mexico.

African champions Kenya top the seedings in Pool B, replacing South Africa – who have reached the last two qualifier finals but lost their chance to take part this year after they pulled out of the African Championship last year.

The Kenyans, however, beat South Africa twice last year and were favourites to have done so again in Botswana if the Springboks had turned up. They certainly stand a very good chance of going one better than last year’s semi-final.

First, however, they too will face continental rivals in their pool, in the shape of Uganda, as well as Papua New Guinea and hosts Hong Kong.

Pool C is headed by Brazil, battling to regain a World Series spot for the first time since the Rio Olympics. They also face familiar opposition in Argentina, as well as Kazakhstan and Poland.

This is a tough tournament with no room for error. Unusually, assuming the competition follows the pattern of previous years, when you are out of contention for a spot in the final that is the end of your competition. There is no Challenger series or bronze final. This is all about the winner – there is no prize for coming second.

Also - unlike the World Series - there is not advantage in being in Pool A. The team with the best overall performance in any of the pools (competition points, then - if level - points difference) will be ranked first, and so on down to eighth place. Teams ranked ninth to 12th go home after Day One.