World Rugby have announced changes to the World Sevens Series from the 2023-24 season which will bring the men’s competiton into line with the women’s. 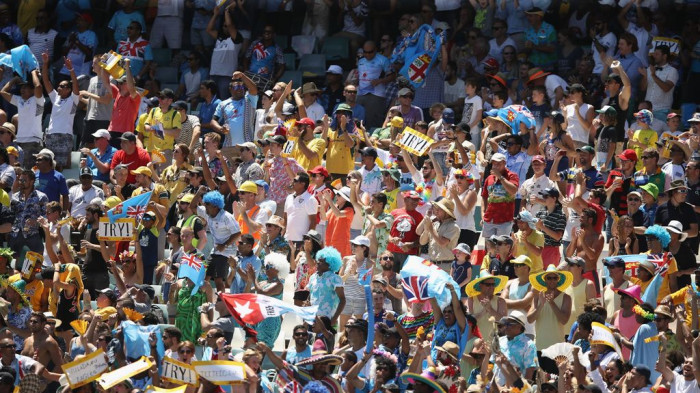 Major changes will be made to the Sevens World Series from next year, though in practice they will have little effect on the women’s series.

The changes – which appear to be prompted by a need to reduce costs – will see the men’s series reduced in size to match the format of the women’s. This will see the men series lose 25% of its teams (down from 16 to 12) and more than a third of its tournaments (down from 11 to seven).

As readers will know, the women’s series already has 12 teams and seven tournaments.

All tournaments will be “double headers” and, with the loss of four men’s teams (and therefore some 24 matches) these events will almost certainly be reduced from three-day competitions to two – another significant saving, and something we understand that broadcasters had been calling for.

The only major change that affects the women will be that the seventh round of both series will now be a “Grand Finale” and restricted to just the top eight teams after six rounds. Teams ranked ninth to 12th will join the top four ranked teams from a “Challenger Series” to play-off for the four places in the next edition of the Series.

The four unsuccessful teams will go into regional competitions to qualify for the next Challenger Series, which comprises of 12 men’s and 12 women’s teams competing in the second level of international rugby sevens.

This is particularly interesting because it means that whichever team finishes bottom of the series will now be able to compete to retain its place, instead of being automatically relegated.

This should significantly favour the teams already in the series because instances of full-strength World Series teams losing in competition to teams outside the series are incredibly rare. Japan going down to China in the Asian Championship last weekend was a standout for this reason alone.

The main reasons for that is that World Series teams are invariably full-time athletes, not least because World Rugby awards them all a participation fee (which will also increase by 70% in these plans). Most unions outside the series cannot afford to maintain a full-time squad, not least because such squads have very few opportunities to play.

And that is the other factor favouring teams in the series. They are playing against the best in the world regularly, with the new structure aiming to provide a tournament every month for seven months from November to May.

The number of teams from outside the Series likely to even begin to seriously challenge for a place in it over the next few years can be comfortably counted on the fingers of one hand – maybe Poland, possibly China, perhaps South Africa, but really no-one else especially now Scotland are part of the new Great Britain team.

So perhaps the downside of this new structure is that it not only does nothing to encourage the development of competitive teams outside the established dozen, if anything it will increasingly freeze in place who those top 12 are.

But for those 12 teams it is all upsides. A regular once-a-month series, playing over two days not three, greater financial rewards to support their programmes, and greater parity with the men’s series. Instances where some women’s games take place on a field outside the main stadium (as will happen this weekend in Dubai) should never happen again.