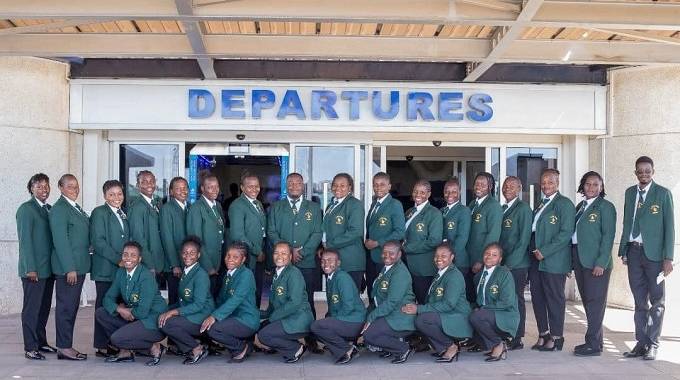 Zimbabwe's squad prepapring to fly out to Cape Town

After a three-year gap, the second edition of Africa Cup kicks off today at City Park, Cape Town, when Zimbabwe take on South Africa for the first time.

The first Africa Cup in 2019 was a purely invitational tournament featuring Kenya, Madagascar, Uganda and South Africa (who were again hosts). South Africa were comfortable winners.

Since 2019 – and despite COVID – Rugby Afrique have been putting a massive effort into expanding the women’s XVs game across the continent. Last year 11 African nations took part in regional trial events in Ougadougau, Nairobi, Kampala, Tunis and Windhoek. This year a series of four more formal tournaments will take place, each providing a winner who will compete for the Africa Cup and place in WXV.

Most of these tournaments will take place in October, but - due to South Africa’s participation in the World Cup – the southern round (officially Pool A) will be played over the next week in Cape Town.

It is a massive step forward for African women’s rugby, so the almost complete lack of any coverage on even confederation and union websites and social media has been immensely disappointing. One cause seems to be the men’s Africa Cup, taking place in France, but the almost total silence given to such an important step for women’s rugby is an indicator of quite how far the game still has to go to achieve real parity of esteem across the world, outside the top 10-12 playing nations.

That South Africa will win the tournament does not seem in doubt. Zimbabwe and Namibia have only ever played eight test matches between them, with the latter only returning to international XVs last year after a nine-year break, when they lost 75-5 to Zambia. Zimbabwe were also well beaten by Uganda in their “warm-up” games last year. The scores could be quite large.

But the key thing is that it is happening. A chance to play against South Africa is rare for African teams – the Springboks have only ever played six tests against African opposition - and both the experience and (in theory) the publicity can only be a positive for the development of women’s rugby in the two nations, and across the continent.

Zimbabwe are one of handful of national women’s team who are coached by a women - Lissy Wasarievu – who is also one of her country’s leading referees, for both men’s and women’s rugby. Their captain is Melissa Ndlovu, who with her entirely amateur squad - has been preparing for the games for the last month.

South Africa have done their opposition the honour of fielding a strong squad for the games, with 13 players returning from their European tour at the end of last year for this series. In addition Aphiwe Ngwevu and Nompumelelo Mathe, who missed the November tour return to the team. There are also recalls to the pack for locks Nomsa Mokwai and Karthy Dludla.

Raubenheimer said every match from here on in will be important and experiments are not on the agenda as they prepare for the Rugby World Cup later this year in New Zealand.

“Some of our players picked up niggles in Saturday’s Women’s Premier Division final and we decided to give them a rest, which forced our hand in selections a bit,” he said. “We are slowly but surely trying to put combinations together as we have six Test matches remaining before the World Cup starts. For Aphiwe and Nompumelelo, this is an opportunity to again play international rugby and show to us that they want to be here. We are hoping to build strong competition in the squad.”

The first game kicks off at 3pm local time.