What makes New Zealand so good?

After their Gold medal Olympics performance, we asked players and coaches who have played with and against them, what makes the New Zealand women’s 7s team so good? 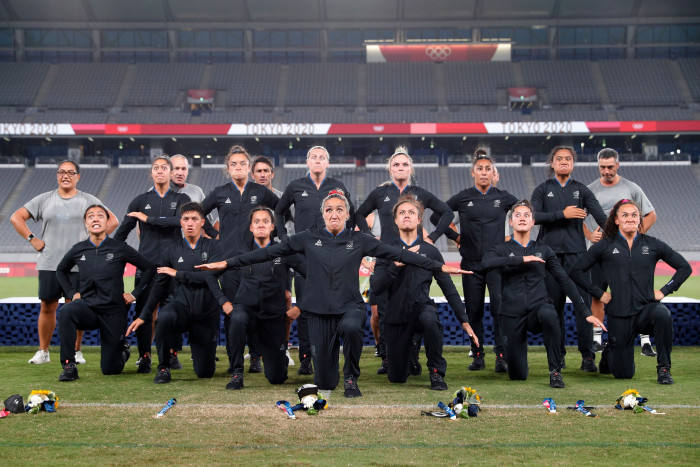 What did you find most impressive about New Zealand's performances in this Olympics?

Burford: It was the critical moments for me, when the pressure was building, when things were not going the way they planned - they still had a smile on their faces, they had each other’s backs and there was never any panic, you could see and sense a complete calmness amongst them. The fact that they have 13 players who can all be game changers helps!

Garcia: It’s the resilience they have, and they showed it especially against GB. When something happens and they made mistakes which we aren’t used to seeing with them – knock-ons and so on - and in that moment you’re thinking what’s happening here? But how they coped with that situation, they showed resilience – I think that is incredible and that’s what makes them very strong

Hireme:I thought this time it was about their ability to cope with pressure and fight back when trailing. That was the difference between them and the other countries. They never stopped believing, they never stopped competing!

Bentz: Their performances were so clinical. They don’t own every title for nothing. The quality of the experienced players and the quality of their all-round squad, just makes them a force that is unbelievable and hungry for success. Not having won Gold at the last Games really made them want this one very much and they were just impressive in all areas of the game.

What did you make of how they coped with the pressure in really tight games - GB and Fiji?

Burford: I think New Zealand train in these situations more often than anyone else - high pressure under the pump, decisions going against them, player down - they prepare for the worst and learn from it. They’re prepared for these scenarios and that’s why they are so good during those moments of pressure. Something they pride themselves on this loving the Mahi and going to dark places and staying there until the job is done and you see that come out in those moments.

Garcia: Maybe they feel the pressure inside, but we can rarely tell if they are nervous! We know with New Zealand that they finish strong usually. Even in tight games, in the last moments you know they will come back strong and that speaks loudly about them and their mindset in terms of competition and performance. They control that situation and their emotions really well – we’ve seen it down through the years and they did it again here. They have that belief inside of them as a team

Were you surprised at how close those games ran?

Burford: Yes and no. So may teams had varied preparation time which actually suited some more than others. Sadly we didn’t see some usual contenders competing at their best such as Canada and the USA - we saw glimpses of how brilliant Australia can be and France have always been competitive but struggled to finish well and strong - but wow didn’t they pick the right tournament! The biggest surprise for me was Fiji. For me the difference to this Fiji team is that they were very fit. They have always been able to play but now they have added that.  GB blew me away to be honest and I think considering the lack of competition all the teams had the tournament as a whole was super impressive.

Hireme: Yes I think so, as we’ve not seen a lot of 7s played the last 18 months, so there was a large amount of uncertainty on how the teams had gone with the preparation leading into Olympics with no World Series.

Garcia: Yes, - GB and Fiji played really good rugby throughout and when teams are playing well in 7s the games are going to be close – and everything counts including the conversions. I was pretty happy that there were so many opportunities for the teams and that the level of rugby was so high in all of the games – it made it so interesting. I just couldn’t stop watching every single game.

Bentz: For some games it was about taking your moment. For these teams, the Olympics has been such a goal that the games were always going to be close because it’s about handling pressure. Everyone wanted the Gold. The delay has made everyone so hungry and the hunger to make your nation proud during these tough times added to that desire and so certain games were closer than before.  A lot of teams had set this has their big big goal and they all performed.

What is it about this NZ team that makes them so well capable of winning?

Burford: The players, the leadership and the belief and a never give up until it’s over mentality. Most teams have a few x factor players, this team is full of them and they are all reliable. The leadership team have full buy in and support of the whole team and management and when you have that the bond is so hard to break down on the pitch.

Garcia: From my perspective, I really like their skills – they probably have the highest skills of any team out there. They can do everything well – the catch and pass is strong – always just in front of the players, they have a good kicking game, they scored tries from kicking in behind and so on.  Their game sense and their tactics are always right too. They go wide to wide often with the strong and fast players, but they can adjust and use the middle and we saw that a lot in these games. They know how to adapt in a game. The most important thing though is their culture – the sisters. Watching from outside, they are just incredible people, and their culture is so positive and constructive and has a great energy. It allows them to express themselves and play with confidence. It makes them even stronger in terms of spirit and mind.

Hireme: Individually they are super talented and work extremely hard, collectively they are unstoppable! They operate as a very tight night family and hold each other accountable – The sisterhood is unbreakable!

Bentz: They have such a great system in place. Everyone knows their roles and responsibilities. If you look at when they arrive at training, how things happen before, during and after, the level of planning and the level of high performance within their structure, everything fits and flows. There is a goal in mind and this culminates in having quality preparation to help them perform. Their preparation in terms of knowing what they want to do and how to execute it is what makes them phenomenal. Their fluency of their passes, the accuracy of their kickoff, the way they attack you at the breakdown – it’s all covered. Nothing lacks. Even when they go behind, they know they can create magic and be patient.  They also have game-breaker players – Woodman, Blyde, Tui they are special players, and you haven’t even mentioned Hirini yet – she was amazing in the final. The way she led and controlled things. To have a leader like that makes a huge difference.

How hard are they to play against and how do teams prepare for it?

Burford: The reason they are so hard to play against is because they are a team that can punish you from anywhere and any mistake you make they will capitalise on it. They are the best attacking team and the balance and combinations of their play makers - Brazier, Fitzpactrick Nathan -Wong, Broughton is superb and then they have raw speed in Blyde, Woodman and Fluher and the work horses of Hirini and Tui. When you prepare to play them you can’t get caught up in them as a team, you can only focus on what you can do as a team. New Zealand have always had this aura around them, which can lose you games before even stepping out on the field!

Garcia: They’re the toughest team in the world to play against. In Spain, we know we can beat them, but we have just done it once in history! It is not impossible, but it happens rarely. They are hard to defend against – they are so impressive in attack. They have a great set piece, and they kick well.

Bentz: It’s hard to play against them! For teams that are not playing them as often, there is a mental fear of being embarrassed or thumped and then there is respect. They carry and aura and a persona of their influence and their titles so there is a lot of respect from teams towards them. For a team preparing to play them, it’s important for you to stick to the basics, to be patient and look after the ball. If you can do that in 7s you can compete – you will get chances. Fiji was 8th in Rio and they came through here so experience does wonders for teams. The important thing is having a high-performance system.

What next for New Zealand?

Burford: Winning medals and titles is one thing for this team, but they are also all about their legacy and I think they will want to raise the bar again. They are history makers but will want to create more.

Hireme: They’ll celebrate and enjoy it initially and spend time with family and friends and live in the moment! There’s no need to rush back in! I’d say many will jump into the 15s with the World Cup just around the corner but they should just enjoy the amazing achievement! Then start to rebuild the 7s sisterhood again. In terms of the difference this will make here, this is huge for New Zealand and will lay a platform for the nation to start investing and supporting women’s rugby from school and community level through to the elite! These ladies have inspired our nation and women’s rugby at all levels both on and off the field in NZ will continue to grow, develop and thrive.

What next for Team GB - what would you like to see?

Buford: Ooo it’s a tough one. Having played for England 7s for so many years I want to see England excel as its own team but seeing the success of Team GB coming together and helping strengthen the squad and other unions is important for the game. Whatever it is, there needs to be some serious thought about how Team GB come together in the next cycle and there needs to be some collaborative thinking amongst unions which can both strengthen individual unions but always develop the programme.

What next for Russia?

Bentz: What’s next is exciting. This is a chance for girls to look up to those who played at the Olympics and a realisation that they can go to the Olympics as a rugby 7s player. There is an opportunity for the future here. I think this will have a boost for women’s rugby in Russia – it is a taste for what can be done. We are disappointed with finishing 8th and how we played compared to how we played all year but we will go back and work hard to improve. The World Series is brilliant but the Olympics is the pinnacle and that’s big for Russia – to get to the Village and rub shoulders with people like Novak Djokovic and stars of all sports.