Sascha Werlich was appointed as coach to both the sevens and fifteens programmes after their failure to reach Rio. This week they face probably their biggest test as they attempt to reach their first World Cup since 2002. We spoke to Sascha as she made the final preparations for her team before the European Championship kicks off on Thursday. 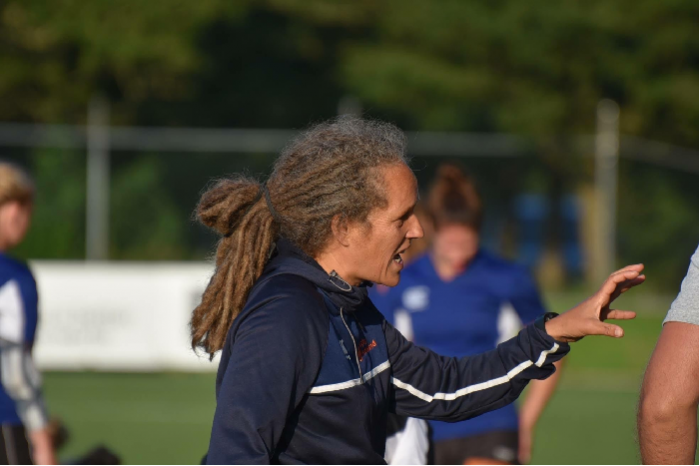 How did you become involved with the Dutch team?
I have been involved with the program since the beginning. First as development coach and later starting the U18 pathway. After missing out Rio some changes have taken place and I got the opportunity to become head high performance.

Women coaches in international women's rugby - indeed international women's sport - are remarkably rare. Why do you think this is?
This is quite a big question and goes even further then sports, I believe. How many female’s are there in top functions anyway? There are different aspects involving this matter and one of the biggest one I think is the socialisation between men and women. Having said that I am happy to got this job because of my experience and not because of my gender.

What have been your preparations for this tournament - you had a terrific win over the British Army team?
We started with a big group of player focusing on the individual skills. From August we narrowed down the group to 32 players and focused on unit and team skills. We played each other and the Army game was a final selection moment for us. We have some girls playing both Sevens and Fifteens and with the WGP Sevens we only could train with the full squad last week. Its going to be interesting to see how the team will manage this.

What are your targets, hopes or expectations for next week?
We will take it game by game, we don’t know a lot about our opponents but definitely won’t take anything for granted! Spain are big favorites for this EC as they have also a lot of Rio players back in the XV squad and off course they playing at home.

There are many familiar names in the Dutch squad, but also some new names. Can you tell us about some of your newer players?
We indeed have a nice mixture of experienced and new girls. Linde van der Velden is one of the newbies, she played against us in the Allstar team and scored twice which got our attention. We also have Marsha Volker who comes through the U18 VII pathway and Sanne Klem who has played four VII EC games and now is selected for the first time for the XV squat. The last new player is Merel Willems, a player who has played for a few years at club level and has made the step up to national level.

What is the state of Dutch rugby now, after the disappointment of not going to Rio?
Although the disappointment was hugh there are a lot of possitives. We now have a good pathway from U14 upwards, there has been a 200% growth of 14-18 year old girls playing rugby. Our biggest challenge at the moment is finding good quality games in the built up to the big tournaments.

The Netherlands is unusual, outside the Six Nations, in playing both international fifteens and sevens. Is this because is demand from the players or the NRB?
When we started the sevens program the players were only allowed to play sevens. We found out that this was not the right way to go as they missed out opportunities to play at a higher level. Also we don’t have that many players, so we changed it back and allowed all players to play both if they wanted to. Looking at the programme at the moment I think it benefits both teams. There is more competition among the players and we can cross over from VII to XV and back. The only problem we found is the EC VII and EC XV being played in two weeks after each other, which is a short time to for preparations and transfer for the players from VII to XV.

Germany have reformed their 15s test team, but counties like Sweden seem to have stopped playing test rugby. What is the future of international 15s in Europe?
I hope that XVs will continue to be of interest to unions and they will continue to fund their teams as it is ultimate goal for any player is to play for their country. It is vital to the growtth of the sport. I would go as far as to say that I believe that if there will not be any, financially supported, international woman XVs here it woudl kill women's rugby in the Netherlands.