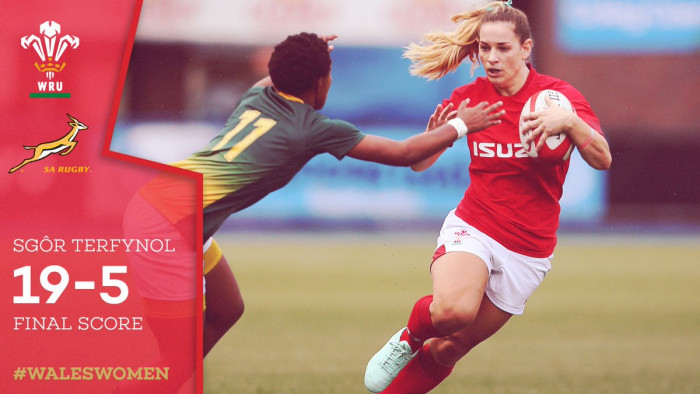 Wales kicked off their autumn campaign with a convincing 19-5 victory over South Africa at the Arms Park. Rowland Phillips' side crossed for three tries in total with Jasmine Joyce, Sioned Harries and Carys Phillips all crossing while Robyn Wilkins kicked four points. All South Africa could muster was one try courtesy of Lusanda Dumke.

But Phillips was not satisfied with the performance

"The way the girls defended was satisfying, but the frustration was that we left a lot of opportunities on the pitch," he said.

Captain Carys Phillips agreed: “"We didn't make the most of our opportunities, but to get a first win of the autumn against a big team like that is great."

Wales set the tone in the early stages of the match with their scrum demolishing the South African eight.

The home sides forward set the platform for their first try with the likes of Phillips and Sioned Harries making the hard yards.

With the South African defence on the back-foot Wales moved the ball wide with some slick handling from Robyn Wilkins and Alecs Donnovan putting Joyce over at the corner. The visitors enjoyed a period of possession and began to exert their physicality but the Wales defence stood firm.

Wales began to turn the screw just before the interval with their pack pushing hard on the South African line. After a couple of powerful carries the ball was spread wide with visiting centre Demi Nel putting in a try saving tackle on her opposite number Donnovan.

But Wales continued to go forward and right wing Nosiphiwo Goda was sent to the sin bin for killing the ball on the floor. Wales opted to take a quickly tapped penalty with tight-head prop Amy Evans charging over the line only to be held up.

A feature of the game was the power of the Welsh pack. “"We've got (forwards coach) Hugh Gustafson in this year and the scrum worked well and put us on the front foot.”, said Carys Phillips and that was clear from early in the game when they shunted South Africa backwards in the scrum with powerful No 8 Harries dragging three defenders with her over the line to extend Wales' lead. Wilkins successfully converted meaning the home side turned around 12-0 to the good at half-time.

Wales kept up the pressure in the early stages of the second half and came agonisingly close to their third try only for second-row Mel Clay to spill the ball forward with the try line at her mercy. South Africa finally won some ball and were able to exert some pressure on the Wales line.

After a period of trying to wear their hosts down with some strong carrying No 8 Aeza Hele crossed at the corner.

But the try was ruled out for a forward pass from outside half Zintle Mpupha.

South Africa continued to apply intense pressure on the Wales line resulting in Harries being sent to the sin bin for illegally slowing down the ball. The Welsh ladies' defence was tremendous as wave after wave of South African strike runners came their way.

"Especially when we were down to 14 [after Harries' yellow-card]], the defensive shift was outstanding, so was Robyn Wilkins at 10, who put in a big game”, said the captain.

But the South Africans eventually turned pressure into points when blindside flanker Dumke sneaked over from short range. South Africa's try served as a wake-up call for the hosts who began to build some pressure of their own.

There was a 10 minute break in play after Wales star Kerin Lake was stretchered from the field after a collision of heads. But the good news is that she recovered quickly after being taken off on a stretcher following a clash of heads, to the relief of team-mate Jess Kavanagh.

"I got a bit worried about her, it's not nice seeing anyone being injured like that, so all the best to Kerin.

"A win's a win, but I want to give a shout out to all the forwards, they played amazingly.

But Wales sealed the win when captain Phillips crossed from short range after a powerful driving lineout by the hosts.

"Hong Kong play fast, they want to get it in and out of the scrums and play with high tempo, while Canada are quite similar to South Africa, running straight with a physical approach, but a lot more experience," Rowland Phillips told BBC Sport Wales.

"We'll assess our injuries, but there will be changes (against Hong Kong) as I need to know which players can cope with the intensity of international rugby."