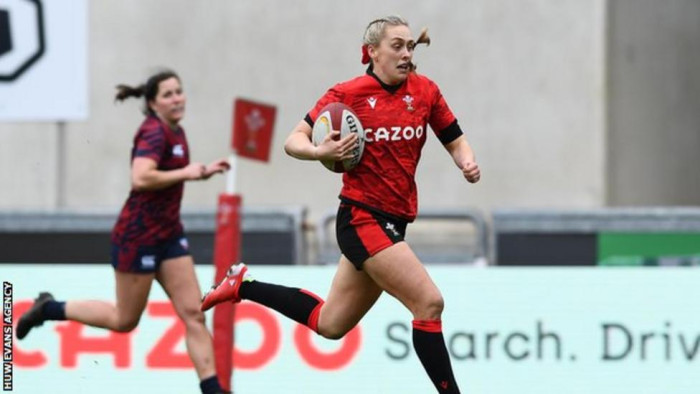 It was Wales' first outing since 12 players signed professional contracts, with 11 others on retainer deals.

Alisha Butchers, Hannah Jones and Donna Rose crossed for Wales, while Sioned Harries made her first international appearance in over two years.

Wales open their Six Nations away to Ireland on Saturday, 26 March.

Wales got off to a dream start, with flanker Butchers stealing line-out ball on the five metre line and finding the whitewash with relative ease.

Robyn Wilkins missed the conversion, but the fly-half was on target with a penalty soon after.

Centre Hannah Jones turned on the gas for Wales' second score, before Falcons hit back with a close range try from prop Rogers.

The visitors, the vast majority of whom play in England's Premier 15s, added a second before the break with Washington crossing from the second row. Kelter added the conversion to keep them to within a score.

As expected both sides made multiple changes in the second half, with Wales head coach Ioan Cunningham introducing Harries to the back row.

The 32-year-old, who won the last of her 58 caps in the 2019 autumn internationals, made an instant impact with one of her typical barnstorming runs.

Lisa Neumann also swapped from the wing to centre as Cunningham experimented with positions, while there was a debut for Sisilia Tuipulotu, the rising teenage star and cousin of Wales men's number eight Taulupe Faletau.

Emma Hennessy, Lowri Norkett and Llandaff North duo Liliana Podpadec and Jenni Scoble also made their first appearances in a red shirt in the uncapped friendly.

In a fractured second half the visitors adapted best to breaks in play, outscoring Wales by three tries to one.

Wales were on the scoresheet first, Lleucu George showing her prowess with the boot by slotting over a penalty for Wales.

Zachary then scored either side of a Wales driving line out, with Rose celebrating her first try at this level.

Kelter ran in a fifth try for USA, while Megan Foster added her second conversion of the afternoon.

"It was massively worthwhile. We can look at that as individuals, but also as a team, and look at what went well, but also what we need to work on going to Ireland in two weeks' time.

"This difficult thing was we played so many girls today, it's hard to build continuity, but I thought everyone worked really hard and there's some real glimpses of good stuff there.

"So there's loads to take from that, we can watch it back, reflect and review it."