New Zealand completed another series win, but it was the United States who made the headlines in Biarritz. 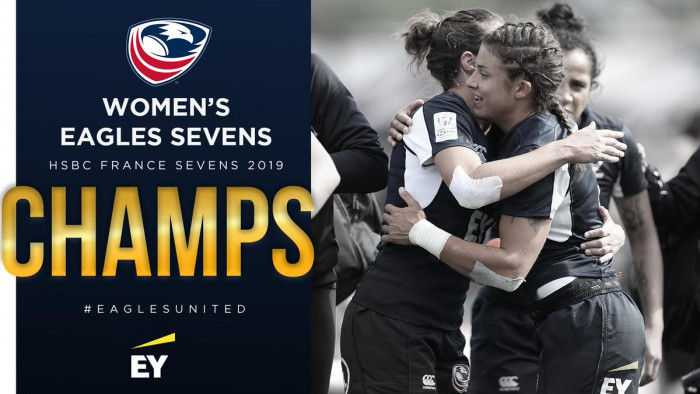 The Black Ferns had already won the series  – their fifth in seven years – before the final against the United States, but that seemed to inspire Eagles against a team that had won their last seven finals.

Alev Kelter - who had missed the opening day through suspension - struck first for the USA, speeding down the left wing for the opening try. She then made a vital turnover after Kelly Brazier had sidestepped two players setting up Cheta Emba grabbed her team a second try. Ruby Tui pulled the Ferns back after she picked up the ball from a ruck and charged down the touchline, though Kelter chased and came close to denying the try that was only cofirmed via the TMO.

From the restart, after a juggle from Emba, it was Kelter again as she slipped a tackle to race 70 metres for her second try and the Eagles third, They led 19-5 at half-time.

The Ferns hopes to overturn that lead received a set-back when Michaela Blyde was sin-binned for a deliberate knockdown, after whiich Lauren Doyle over for the Eagles fourth try. Shakira Baker did manage to pull one try back for New Zealand but it was not enough to stop the United States from celebrating their first Cup title.

USA coach Chris Brown added: "It’s a pleasure for me to be able to work with them and do my part but for them to stick to what we agreed to all weekend was special. We had to sort our culture out and make sure they wanted to play for each other, and know what it was like to put the team before themselves. We’ve got a good group here and from there we had to work out how to actually defend and show our character through our defence. That’s what we’ve done all season. We’re still missing a few cogs on the attacking side but we’re progressing."

Even so, New Zealand finished top of the series standings with 110 points, 10 more than United States in second place, while Canada came in third on 94 points and Australia fourth with 86 points. This quartet have all confirmed their place at the Tokyo 2020 Olympic Games alongside host nation Japan and South American champions Brazil, who qualified last week.

At the other end of the standings China who were relegated despite reaching their first Cup quarter-final this season. They and Fiji victory finished on 21 points but the Fijians better points difference allowed them to remain a core team by the narrowest of margins. As a result next year's series will have no representative from Asia for the first time.

Canada had won their past 12 series meetings with Spain and they started the better of the teams in the bronze final with Bianca Farella andBrittany Benn touching down to give them a 12-0 lead. However, Spain drew on their fans’ enthusiasm to hit the front with tries either side of half-time by Maria Losada and Elisabet Martinez. Spain looked to be set for a first medal since winning bronze in the first-ever series round in Dubai in 2012 as they kept up the pressure in the Canadian 22, but Anne Fernandez de Corres’ attempted kick into space was blocked and Charity Williams went down the other end to score the winning try and leave the Leonas devastated.

Spain, playing in only their third Cup semi-final in series history, had earlier scored first when captain Barbara Pla burst through, slipping a tackle to race clear unchallenged. USA, though, are no strangers to semi-finals as the only team to reach every one on the 2019 series, and they were quickly level after Naya Tapper sliced through the Las Leonas' defence. The score looked like it would stay at 7-5 until with the last play of the half USA hit the front after co-captain Doyle went over. Kelter struck early in the second half, having sat out their quarter-final after picking up two yellows against France on day one, scored early in the second half before Tapper's second try sealed victory for the Women's Sevens Eagles and ended their run of four semi-final defeats in a row since reaching the title decider in Glendale.

New Zealand had won their last 12 Cup semi-finals going into this meeting with long-time rivals Canada, a side they were on a nine-match winning streak against and they struck first through Alena Saili and and Nathan-Wong inside four minutes to lead 14-0. It could have been more had Blyde been able to escape from Williams, but instead it was Canada who cut the deficit with a try by Karen Paquin. Tui restored the Black Ferns Sevens' two-try cushion with a run-in and Canada could only manage a last-minute try from Williams as New Zealand kept alive hopes for a fifth Cup title of the season to go with their fifth series title.

Charlotte Caslick gave Australia the perfect start in the fifth place play-off with France, running down the touchline to score in the first minute. The two sides traded tries to leave the match finally balanced at 12-10 until Ellia Green sprinted away for two tries to clinch a 24-10 victory for Australia over the side they had pipped to the final Tokyo 2020 spot via the series.

China already knew they were relegated by the time they took to the field against Russia in the seventh place play-off, but they ensured they won their last match as a core team on the 2019 series with a strong performance, tries from Lyu Hewen and Yang Xu giving them a 12-0 lead before Alena Mikhaltsova's try late in the first half. Chen Keyi broke clear for their third try and, despite Baizat Khamidova dotting down for Russia, China wrapped up the 26-12 win thanks to Ruan Hongting's try.

In the fifth place semi-finals Australia bounced back from their loss to Spain with a five-try, 31-21 win over Russia to guarantee a top six finish in Biarritz. Emma Tonegato and Evania Pelite scored a try in each half with Green scoring the record breaking 1,143rd try of the series, beating the 2014-15 record when there were also six tournaments. In the other, France twice had to come from behind against China to triumph 21-14 after Coralie Bertrand's late try broke the deadlock.

Earlier in the quarter-finals, Spain delighted their huge contingent in the crowd by scoring the day's opening try against Australia, Patricia Garcia bursting through and just having enough in the legs to make the line for their first try against Australia at this stage since 2014. Spain looked set to score again late in the half but Losada lost the ball and Australia went the length of the field with Green dotting down under the posts for a 7-5 lead. Australia scored again when Caslick got a boot on a kick through before the Spanish defender for an easy dot down. Spain weren't to be denied, though, as Lide Erbina sprinted clear and kicked out of an attempted tackle before Australia looked to have a kick-through covered only to allow Paula Requena to get her hand to ball first to ground over the line to seal a 15-14 win.

As the excitement died down after Spain’s victory that also denied Australia the chance to confirm their place at the Tokyo 2020 Olympic Games, USA raced into a 10-0 lead with tries by Ilona Maher and Kris Thomas in the second Cup quarter-final. Russia hit back with tries by Kristina Seredina and Elena Zdrokova either side of Tapper’s effort for the Women's Sevens Eagles, but Thomas’s second and another from Rookie of the Year nominee Kristi Kirshe wrapped up the 27-12 win.

France’s faint hopes of claiming the final ticket to Tokyo 2020 through the series rested on this match with victory essential, but it was Canada who burst out of the blocks with tries by Caroline Crossley and Farella for a 12-0 lead to the dismay of the home crowd. France created a few opportunities but either couldn’t find a way through the solid red wall or their final pass went astray with Les Bleues only able to manage a Camille Grassineau try as a consolation in the final minute. The defeat confirmed Australia as the fourth and final qualifier for Tokyo 2020 Olympic Games through the series.

The remaining quarter-final brought together two teams with very different agendas, New Zealand knew victory would secure a fifth series title while China are fighting to avoid relegation from the series. Blyde scored two early tries before Saili shrugged off tackles to score and make it 19-0 to the Black Ferns Sevens at half-time. Blyde then completed her hat-trick before further scores from Terina Te Tamaki and Tui wrapped up the 36-0 win to set up a semi-final with Canada.

Fiji not only won a fourth Challenge Trophy in a row with their 27-10 win over England in the final but also secured their place as a core team on the 2020 series in the process, because if even China went on to win their seventh place play-off against Russia to finish on 21 points too, the Pacific Islanders' points difference is better. Celia Quansah scored the first of her two tries to open the scoring, but Fiji didn't look back after tries from Akanisi Sokoiwasa, Ana Maria Roqica and Viniana Riwai put them 17-7 ahead at half-time. Raijieli Daveua and Ana Maria Naimasi added tries to allow Fiji to finish the season on a positive note in a match that also saw England captain Claire Allan take to the field for the last time on the series.

Scotland were another team celebrating after beating Ireland 26-14 in the 11th place play-off to claim their first-ever series victory, a just reward for their performances over the weekend as the invitational team in Biarritz. Lisa Thomson's try on the stroke of half-time edged Scotland into the lead for the second time after Megan Gaffney's opening try and they would not relinquish it, Rhona Lloyd and captain Helen Nelson adding second-half tries to become the first invitational team to win a match on the 2019 series.

In the semi-finals, England bounced back from the disappointment of missing out on the quarter-finals with a 24-17 victory over England courtesy of tries by Deborah Fleming, Beth Wilcock, Heather Fisher and Quansah. Fiji then knew that victory was a must if they were to boost their chances of winning their relegation battle with China, and while they were pushed all the way by invitational team Scotland they ran out 31-10 winners with Daveua scoring a try in each half.

While some teams in Biarritz had Olympic qualification or a place in next year’s World Series on the line some had little to play for, which accounted for some very different selection policies – England in particular resting many of their first choice players ahead of next month’s more important European Olympic qualification process. The result on the opening day had been some variable and, on paper, unexpected results on the opening day, no more so than Scotland’s tie with England – a match that they would gave won by for one miss-thrown lineout in the dying seconds.

As it was England – second seed in Pool A – ended bottom of the pool. New Zealand topped the pool by some margin, only England giving them any pause when they briefly went ahead at the start of their game. Russia qualified for the quarter-finals in second place.

Australia topped Pool B, but only after coming from behind to beat Canada in the final game. Spain took third place after a similarly narrow win in their decisive game with Ireland. Nonetheless by reaching the quarter-finals Canada ensured that they will play in the 2020 Olympics.

The United States also wrapped up their Olympic qualification by merely setting foot on the field for their first match, but they still went on to end the day unbeaten, France ending runner-up in the pool – and China, crucially, third after a last-minute one-point win over Fiji giving them a last chance to avoid relegation.