Nations Cup hosts USA are leading the way at this year’s competition having come through their second game with a win over Canada. England survived a late charge from South Africa to sneak their second game by a point. 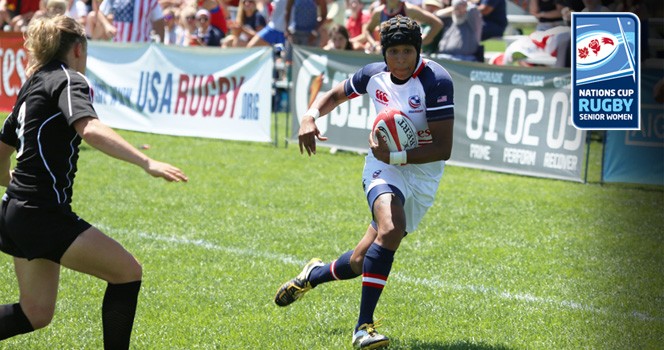 South Africa pressured England early on in the first match of the second day at the Nations Cup and were rewarded with the opening try.

Zenay Jordaan showed her speed and finishing ability to touch down in the corner before Marnezelle Rabie slotted an excellent side line conversion.

England had trouble keeping a physical South African side at bay being put under enormous pressure their lines but crucially they did score next.

Lauren Cattell cut through the defence well and offloaded to Amy Wilson-Hardy for a nice try between the sticks to tie game at 7-7.

A chip and chase by South Africa on the half hour mark was gathered well by England, but the pace and pressure of the Springbok defence saw the ball turned over and Nolusindiso Booi took advantage and gave her team a 12-7 lead with the game’s second try.

South Africa added another try three minutes before the halftime whistle from a lineout near England’s 22 - Jordaan taking the ball to beat two defenders to find the line and give South Africa a 17-7 halftime lead.

England though got right back into it four minutes into the second half with a Cattell penalty to reduce the gap. South Africa came agonisingly close to adding an impressive fourth try when Daphne Scheepers kicked a loose ball down field only to just knock it on over the line.

Cattell added another penalty in the 60th minute to draw within a try of the lead at 13-17.

Reminiscent of their opening match of the Nations Cup Tuesday against Canada, England were in a position to take the lead with only minutes remaining in the match. From a lineout on the 22, an England maul resulted in Rochelle Clark scoring the match-winning try with six minutes remaining.

Only down by one at 17-18, South Africa had a golden opportunity to snatch a late victory of their own in the 78th minute. Jordaan, the captain, missed a penalty kick and England held the ball for the remaining minutes to earn their first win of the tournament.

In the second match of the day, USA started on the front foot and were awarded an early penalty in the sixth minute. Kimber Rozier missed the kick, but Lynelle Kugler was over for a try two minutes later. Canada had two penalty kicks of their own in the first 15 minutes but failed to convert either.

Christy Ringgenberg charged down a Canadian clearance kick on the line in the 19th minute to touch down, but she was deemed to be offside and Canada were let off.

But USA continued to press and winger Nathalie Marchino raced over the line to score the second try of the game and give her side a 10-0 lead.

A threatening Canadian lineout in the 30th minute almost resulted in their first try, but the Eagles kept out the maul before Emilie Bydwell was sent to the sin bin.

With a player advantage, Canada put together another maul and pushed through for a try to get back into the match.

Sarah Chobot came into the match early in the second half and the prop made an immediate impact with a try in the 50th minute and Rozier converted for a 17-5 lead.

Canada struck back right away through Laura Russell to cut the deficit to 12-17, but the Eagles replied with a try of their own. Good pressure and movement just outside the try zone stirred both benches before an Eagles knock on turned over the ball. Canada won the ensuing scrum but turned the ball over themselves and Chobot again found the try line for a 22-12 lead.

Canada’s Elissa Alarie made a nice break through the middle of the field a few minutes later and set up Jane Kirby for a try and Alarie almost repeated the feat after the restart, but Marchino and Ringgenberg showed their sevens speed and caught her to prevent leaking another score.

With Canada down by a try, the Eagles pushed for another in the final ten minutes of the match and got it from Kristin Zdanczewicz. Meya Bizer converted to put Canada out of reach at 29-17.

“It’s been a really long time since we’ve beaten Canada,” Chobot said after the match. “I think it’s a big statement from where we’ve come from. If you look at Nations Cup two years ago, we lost to South Africa and beat them this year. This is a team that’s figured it out and it’s just a matter of getting better and better.”