Uganda too strong for Zimbabwe

Uganda have beaten Zimbabwe 41-0 in the first test match played between the two nations. 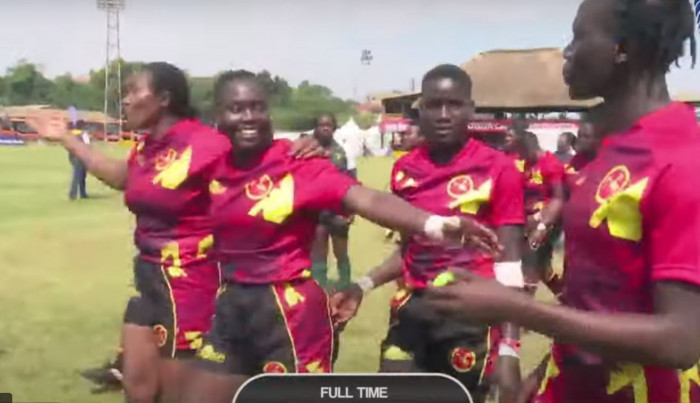 Zimbabwe enjoyed most of the early possession, but could not make it count but when Uganda began to attack they were soon on the board.

After 19 minutes Samiya Ayikoru crashed over after a quick break by the backs led by Charlotte Mudoola. A second try was added five minutes later, Emilly Lekuru from the line out to extend the lead to 10-0.

Poor kicking resulted in a change of tactics for a while by Uganda, who started opting for scrums for all penalties earned at the breakdown as it was an area where they had an advantage over Zimbabwe, who have been more dangerous in open play. A yellow card for Uganda’s Yvonne Najjuma also slowed them down and at halftime the score remained at 10-0.

It took until the 57th minute before Uganda finally broke through for a third try. Brilliant phase play from the Rugby Cranes led by scrumhalf Julie Nandawula with quick recycling of the ball to Peace Lekuru who forced her way over the line. Conversion attempt by Mudoola was this time successful.

Three minutes later Grace Auma extended the Lady Rugby Cranes lead after a good carry by Najjuma and Atyang. Quick ball out to the backline move the ball quicly to the winger who showed her opposite number a clean pair of heels. 24-0.

As Zimbabwe tired the score began to mount. Emilly Lekuru scored second try on 68 minutes from the set piece, beating her opposite number for power and pace. 29-0.

Finally, from the final play, the Ugandan pack drove over, Asha Nakityo getting the ball down. Final score: 41-0.