Tunisia and Senegal became the 67th and 68th nations to play women’s test rugby when they met in the first game of a three-team series, which will also involve Cote d'Ivoire. 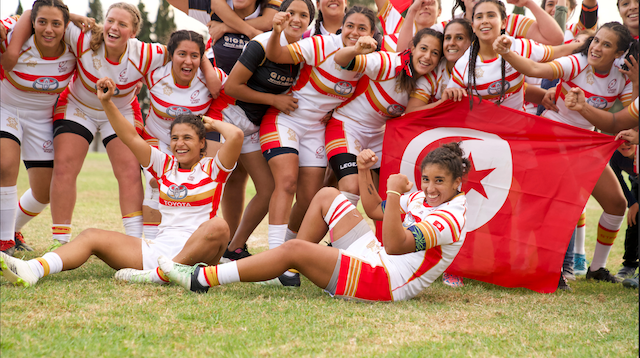 The game was played at the El Menzeh sports complex in Tunis. A small but enthusiastic crowd cheering on the home team with plenty of national flags.

Tunisia played a fast opening to game and got off to a great start with a try from flyhalf Ameni ben Salem within the first minutes. However, after this they had to defend hard, as Senegal pushed forward, lead by powerful No. 8 Maguette N’diaye, and Senegal lock Fatou Cissokho was tackled just before the line by Tunisia’s Lamia Mlawah.

Senegal has may have had the power, but Tunisia’s smaller team had the speed and when they had the ball they put Senegal under real pressure which was made worse when flanker Coumba N’diaye was forced to retire having sustained a shoulder injury.

Ultimately both sides balanced each other with Senegal’s unable to find a gap in the determined Tunsian defence, the first half ending in with Tunisia’ maintaining their 5-0 lead.

Tunisia’s team manager Abdelaziz Chaouachi said of the opening “it’s a good result, scoring so early, seemed to make a big impact on the Senegalese team psychologically.” He added, both teams are equally strong physically but with different strengths, Senegal is stronger in the scrums and Tunisia play a more technical and faster game, which is a result from their strong showing in the women’s 7s which is a very fast game.”

The second half saw both sides play a much faster game, as both teams found a new confidence boosting their energy.

Senegal continued their tactic of playing an attacking game to push through Tunisia’s defenders, but still they could not counter Tunisia’s highly technical defence and fearless Lamia Mlawah, who brought down Senegal’s mighty lock Yvonne Mendy just before the line.

One of Tunisia’s stars was wing Emna ben Arous whose immense turns of speed brought repeatedly threatened the Senegal’s line on the counter.

The last twenty minutes saw both teams tiring and injuries on both sides came thick and fast. A series of penalties resulted and it was here that Tunisia’s Ameni ben Salem proved to be the difference between the teams, calmly slotting each kick she was presented with to go with her first half try and earn her the woman of the match award.

These games – along with series earlier this year involving Burkina Faso, Cameroon, Kenya, Madagascar, Uganda and Zimbabwe – are being played under the “Africa Cup” banner, although in practice this is not  tournament but rather a chance for as many African teams to play test rugby before a fully-fledged Africa Cup takes place next year, with a chance to win a place in the WXV tournament in 2023 on offer.

Tunisian team manager Abdelaziz Chaouachi said that these games are important “because they will give the teams their world ranking so this will help Rugby Africa organize and structure the Africa Cup games.”