Stade Toulousain Féminin have won the French Elite 1 championship for the first time. 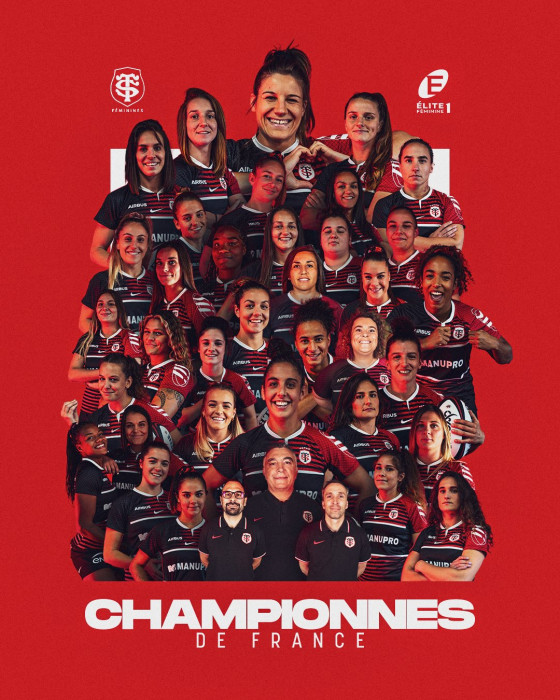 Formed in 2014 as part of a project called "Stade Toulousain Rugby Féminin 2020" the initial target was to establish a high-level women’s team by the end of the decade.

They were admitted straight into the Armelle Auclair – now the Elite 2 – competition, and won it at their first attempt, winning them promotion in to what was then the Top 8.

Meanwhile, at the same time as Stade Toulousain was being formed, St Orens – a Top 8 club on the outskirts of Toulouse – ran into financial trouble.

St Orens was one of France’s oldest teams, and had reached seven finals between 1990 and 2002, winning two championships in 1990 and 1993, but in 2013 they merged with Blagnac – a second level team from another Toulouse suburb on the west side the River Garonne. They initially played as Blaganc St Orens (“BSORF”) but in 2017 they changed their name to Blagnac, and moved to Ernest-Argelès Stadium in Blagac, less than 2km from Stade Toulousain.

Under their new name they reached the play-off semi-finals almost every year before reaching the final for the first time, last year. But despite hosting the game at Ernest-Argelès they lost 13-8 to Romagnat.

In Saturday’s final in Grenoble, it was Blagnac who struck first with a fourth minute penalty from Lina Queyroi, the only score until shortly before half-time when Camille Cabalou finally got Toulouse on the board with a drop goal.

Blagnac regained the lead soon after the restart with a Melissande Llorens try, converted by Queryroi.

The prompted Toulouse to replace their entire front row, but the Blagnac defence remained firm. But Toulouse’s Pauline Bourdon reduced the deficit with a 53rd minute penalty, and this was narrowed to a single point by a Cabalou penalty on the hour.

The pressure on Blagnac finally told when Zelie Reulet scored Toulouse’s only try of the night, converted by Bourdon – which was enough to win the title for Toulouse 16-10.