The final leg of the World Series begins on Saturday in Biarritz with the destination of the title, relegation and three Olympic spots to be decided. 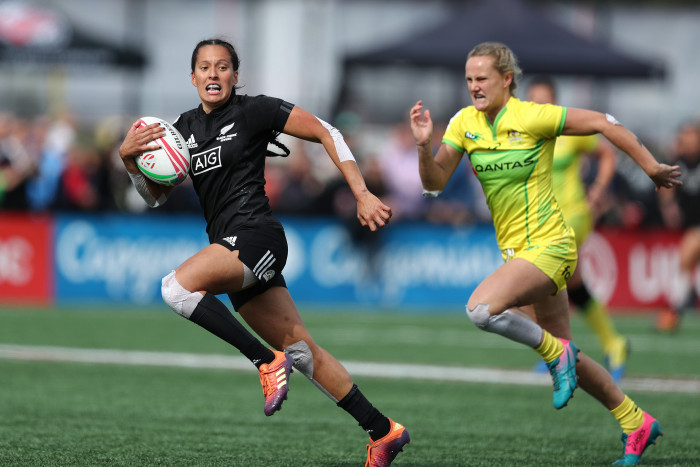 Six of the twelve squads for Biarritz have been announced:

Assistant Coach Cory Sweeney said that the Ferns are focusing on a strong finish to their already successful season.

“We’re five tournaments down with one to go and its really exciting to be in the position we are. We control our destiny at this tournament, we’ve worked really hard to get to this point so we are going to France to win, and if we do that, we will secure the Series title which would be an amazing bonus.”

The Black Ferns have won four of the five tournaments this season and have secured qualification to the 2020 Tokyo Olympic Games. After a mid-season injury crisis the team is almost back to full strength, with Theresa Fitzpatrick returning for the Biarritz tournament.

“It’s been a tough few months injury wise but the last few weeks we’ve had 18 or 19 players on the field which is amazing and most of them were available for selection.”

Scotland are the invited team for Biarritz.

Nine of the twelve players travelling were part of the squad that were beaten in the final of the World Sevens Series qualifiers in April.

The tournament will potentially allow two new players to receive Scotland Women 7s caps with the addition of Meryl Smith and Evie Tonkin. Meryl Smith was one of the standout performers in last season’s U18 7s programme and has progressed through the Scottish Futures U20s over the past year.

Evie has been performing well for DMP Sharks in the Tyrells Premiership this season and was highlighted to Scotland by the Scottish Rugby Scottish Qualified Programme. She was invited to train with Scotland 7s over the last month.

Head Coach Scott Forrest said, “We are really excited to have the opportunity to play at a World Rugby Sevens Series event. The team played fantastically well at the Hong Kong qualifiers, but it was clear that we are lacking the experience of playing in pressure situations in front of big crowds. Playing at Biarritz against top Sevens teams such as New Zealand and England will be a really valuable experience for the players.

“Meryl has performed well in training and deserves her opportunity to test herself at a higher level. It is exciting to be able to bring in some new young players and really expand the depth of our team. It is great to welcome Evie into the squad as well. She comes with experience of playing in a quality league in England and I think she will be an asset to the squad.”

England; Russia: To be announced

Australia have two stated targets for Biarritz - a place at the Tokyo Olympics next year, and a first tournament victory for the season.

Aussie coach John Manenti has named a near-full strength side with Shannon Parry and Dom Du Toit returning, and rookie Rhiannon Byers also named for a potential debut. The only absentee is Emilee Cherry, who is expecting a baby this month.

Another good showing could push Australia as high as second in the series but fourth is the minimum goal. Australia are 14 points ahead of fifth-placed France, and only need only to finish within eight spots of the French to stay ahead, which means if Australia make the quarter-finals they’re booked in to defend their Olympic title, and to do that two wins in their first two pool games against Spain and Ireland would be enough.

"Obviously we haven’t won one of the series (legs) yet and that’s definitely going to be the one this time around,” Aussie co-captain Sharni Williams said. "There is a lot on the line for us, we are sitting fourth at the moment and we really need to make those quarters and semi-finals and make the most of it to secure our spot for the Olympics. They automatically take four away and we are sitting there right on the cusp. It is for the top wigs to figure out all the stats and what needs to happen here and there. But for us players it is really to focus on each game at a time.”

"That’s the goal. That’s what we are setting out to do. Obviously it hasn’t gone the way we’ve wanted it to do, but as an athlete you get thrown things left, right and centre,” Williams said. “You have been riding the rollercoaster and it’s up to us to drive it and fix it. We dictate what’s going to happen and we want to be in that top four straight away to make it easier for us to qualify.”

Canada just missed out on their ticket to Tokyo in Langford last month.

“Olympic qualification was the goal we set at the beginning of the year and we’ve been hovering around in a top four spot all season,” said Tait. “We’ve had a couple finishes off the podium, but I think we’ve been pretty consistent with our play. We just want to finish off the season on a high note with some good wins and good performances.”

The squad sees only one change with the addition of Sara Kaljuvee back in the lineup, fresh off a CAN-AM training camp with the National Senior Women’s XV. Joining her will be two powerful forces on the Women’s Sevens squad: Charity Williams and Britt Benn. Both had dominating performances in Langford with Williams notching six tries over the weekend and Benn finishing atop the DHL Performance Tracker.

Spain; Ireland: To be announced

The only team to have reached the semi-finals in every tournament this season, the Eagles only needs to step foot on the field for their first match to earn the single World Series point needed to confirm qualification to the Tokyo 2020 Olympic Games.

Head Coach Chris Brown has selected a traveling group of 13 players including a few faces who didn’t appear last tournament.

Cheta Emba and Kasey McCravey will join the bunch as Jordan Matyas and Meya Bizer both recover from injuries sustained in Langford.

“It’s been a year defined by a lot of personal growth and one could say learning how to win ugly in big matches”, says coach Chris Brown. “I’m adamant the fight we see from the group has developed from our players’ willingness to continually be vulnerable with each other. The level of enjoyment and compassion towards one another has increased significantly.

“The next step for us is to enhance the consistency in how we control matches. When this group is on the same page and they individually take ownership and execute, they’re hard to handle. I'm hopeful that taking comfort in doing the simple things well will enhance the performance we see across the whole weekend in Biarritz.”

Fanny Horta leads France into their home leg of the world series and admits her pleasure at being able to play in front of a home crowd.

" Being in France does not change anything. We will start the tournament with the same desire, the same concentration and the same involvement as usual. We are just happy to be near our loved ones. This is clearly something nice. It's great that they have the opportunity to see us in real time and so stop programming the alarm clock in the middle of the night.”

But her and her team’s eye on Kazan, where will be played the Olympic qualification Fanny HORTA

"Direct qualification does not depend on us so it removes a kind of pressure, and Biarritz can allow us to prepare for the tournament in Kazan."

Fiji, China: To be announced