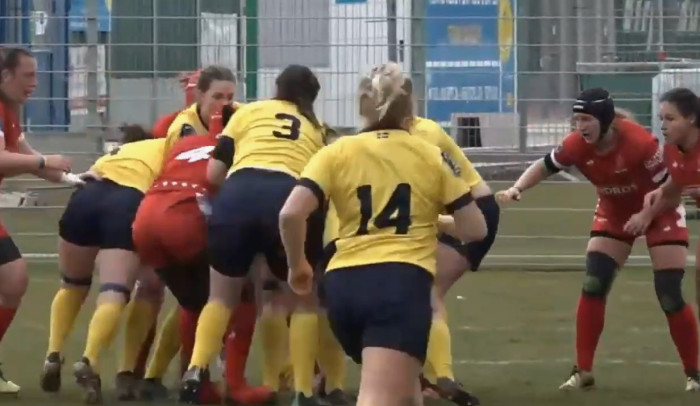 As a result, the world’s third oldest test nation lifted their first ever 15-a-side silverware.

Playing in only their second Trophy campaign since returning to test rugby 2017, Sweden have looked a level above their opponents. Able to call on players from the English Premiership they have improved with every game.

Switzerland, who are going through something of a rebuilding phase, had little answer to the Swedish game and were behind from the third minute when Matilda Mahlberg scored the opening try, breaking down the left touchline. Four minutes later Minonna Nunstedt touched down after a break down the same touchline that began with fullback Amanda Swartz collecting a Swiss clearance, passing to Minna Leijonhufvud who set up Nunstedt to score just to the left of the posts.

Leijonhufvud added her own try with another break down the same left wing after 12 minutes and with the help of the boot of Victoria Petersson Sweden were 19-0 ahead.

The Swedish pack was in control up front, and a 5m scrum after 20 minutes gave them a fourth try and bonus point, no 8 Matilda Mahlberg getting the score. Petersson added the extras, and Sweden were 26-0 ahead.

The Swiss were battling hard, but every Swedish visit to their half was resulting in points, and a fifth try came after 27 minutes from Mahlberg , and a sixth after 35 from Emelie Hellgren, and only the speed of Switzerland’s Claire Oestreicher to a loose ball prevented a seventh just before the break, which came with Sweden leading 36-0.

Switzerland began the second half stronger and threatened the Swedish line several times in the opening 10 minutes, but the Swedish defence held, and soon after they were able to break into the Swiss the Swedes scored again, Olivia Palmgren getting herself onto the scoreboard.

Switzerland defended well in the second half, but were unable to relieve the Swedish pressure and inevitably a eighth and what proved to be final try from Maja Meuller rounded off Sweden’s biggest test win for nearly 10 years.