The Springboks are back

After four years of self-imposed exile, South Africa return to test rugby this in November with an ambitious and challenging European tour. 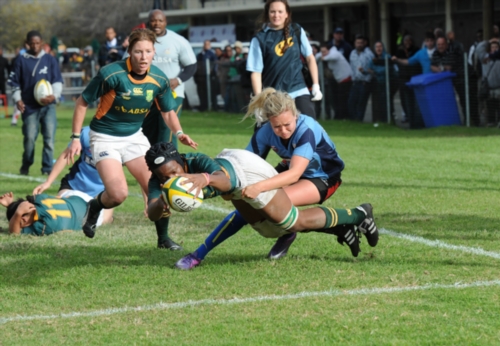 In recent years the biggest headlines about South Africa’s women’s rugby have come from the unpredictable, inconsistent and – at times – what seems irrational behaviour of officials to their national teams, so it is a welcome change to have their players at the centre of the story.

It is remarkable that South Africa have not played test rugby since the end of the 2014 World Cup, a tournament that saw them end in 10th place, with just one very narrow win over Samoa on the credit side of the balance sheet.

The reaction of the SARU was to retreat from the world, even rejecting a chance to compete for a place in the 2017 World Cup, despite World Rugby giving them a free pass to the final qualifier where effectively they would have to beaten just Hong Kong to qualify.

Last year a tentative return was made when a “South African Select” team took part in a low-key three game tour to England, returning with a good win over the British Army, but two defeats to England Academy XVs, though they improved from a 47-12 loss in the first game to lose only 15-12 in the second game.

This year they are back with a four-game three-week tour that will include three tests after a warm-up match against the UK Armed Forces XV on Friday at Rosslyn Park (kick-off 7pm).

Nolusindiso Booi will lead a Springboks squad that featuring youth and experience with Zintle Mpupha – the Spingbok Sevens captain – and Babalwa Latsha as vice-captains.

“I am pleased with the quality of the team,” said Raubenheimer. “There is a good mix of youth and experience, which is perfect as we start building towards something bigger and better for women’s rugby in South Africa.

“Several players have come through the Under-18 to Under-20 structures and they now have the opportunity to show what they can do on an international level, which is encouraging.”

Raubenheimer emphasised the importance of having an experienced captain after entrusting Booi with that responsibility and said: “It is always important to have experience in the group, especially if one considers that we last played an official Test match four years ago.

“Cindy was part of the 2014 Women’s Rugby World Cup squad, along with players like Fundiswa, Tayla and Thantaswa, and their experience is going to be vital in guiding the young players on tour.

“One would always like more time to prepare, but I am pleased with what we put in place at our training camp. The enthusiasm the players showed at training and their excitement about being part of the squad is fantastic, and that is a good sign as we embark on this tour. We have done everything we can at home, and now it is time to implement that which we have been working on at training on the field.”

Raubenheimer says that the tour will serve as a marker to measure where the team is.

“I am not really sure what to expect over there because we have been out of the international arena for a while now, and this is my first time at the helm with the Springbok Women’s team,” he said. “But what I am certain about it is that it will be a tough tour as Wales, Italy and Spain played in the 2017 Women’s Rugby World Cup. So, this tour will serve as a fantastic platform to measure where we are in terms of the current international standards.”