Spain's A team too strong for Colombia

Spain's A team gave Colombia a warm-up game yeterday (10th February) as the Colombians prepared for the World Cup qualifiers. 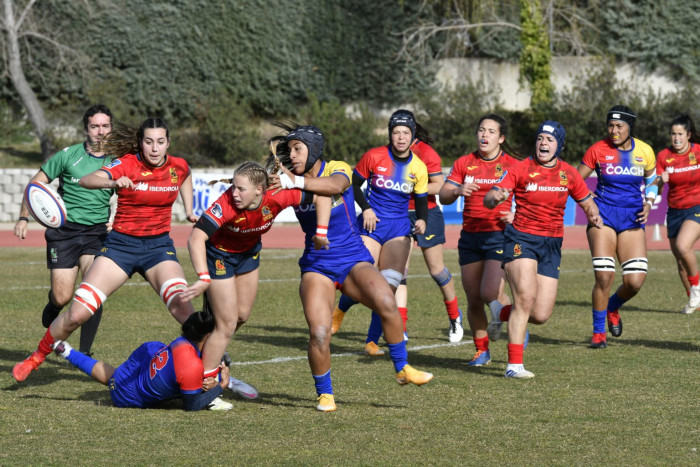 The Lionesses XV returned to the field with new faces, but with the same method of playing that the national coach, José Antonio Barrio, has been developing, and that has given him such good results in recent years. The win triumph harvested by Spain A over the Tucanes of Colombia (47-15) on the field of Valle del Arcipreste (Majadahonda) left a pleasant taste in the mouth based on how well the most experienced players were combined with the new group of ten debutants.

If the coach of the Lionesses was looking to gauge the value of the newcomers in the face of the imminent start of the European Championship, without a doubt that the result of could not be more positive. Nuria Jou, Alba Capell, Zahía Pérez, Claudia Pérez and Cris López were the five new faces in the starting fifteen of Spanish start against the Colombians who arrived in Madrid with the intention of testing themselves in the face of the imminent World Cup playoff next week against Kazakhstan, possibly later Scotland, if the obstacle of the Asian team is overcome.

Spain started the game by trying to lengthen their offensive phases with quick movement of the ball looking for the gap in the Colombian's defence, which has been weak point of teams in the past.. It did not take long for the Lionesses to place get on the board after an excellent individual work of Alba Vinuesa, who served the ball up a silver platter to Cris López, one of the debutants, who played well throughout the match.

Colombia responded through wing Maria Arzuaga, narrowed thes scores with a penalty kick that activated the South Americans, whose powerful forwards began to create problems for the Lionesses behind their 22. The Spanish XV did not panic, who knew how to maintain their cohesion and control on the scoreboard thanks to two tries by captain María Calvo and Claudia Pérez. The young wing, another of the debutants in, was extremely active throughout the contest, leaving her personal stamp with a couple of scores.

The Lionesses did not take their foot off the gas after halftime, moving the ball well and, above all, trying not to give an opportunity to the Toucans to recover, making things difficlult for them with deep kicks. As a result of enjoying many minutes of possession, Spain managed to keep the powerful Colombian pack far from at bay, apart from a couple of opportunities in the second half.

The other five players debutants - Beatriz Baraia-Etxaburu, Belsay Escudero, Eider García, Julia Castro and Martina Márquez - also had their opportunity during a second half in which Las Leonas XVbuilt and insurmountable gap thanks to a quartet of tries from of Beth Segarra, Iciar Pozo, Alba Vinuesa and Zahía Pérez.