Spain dominated the opening European Championship game against Netherlands in Amsterdam today, beating the Dutch for the eleventh time by a convincing 0-69 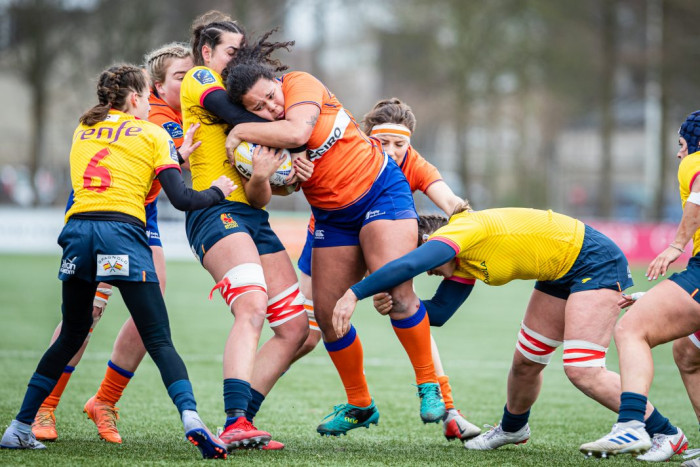 José Antonio Barrio 's players once again made clear their clear superiority over the Dutch, who could do little in the face of the gale of play and tries (eleven in total) by the current continental champions. With this result, the Spanish will play for their ninth title in Madrid against Russia next week.

“Yunque” took advantage of the visit to the Netherlands to continue giving another chance to several of the Lionesses who already made their debuts little over a week ago in Majadahonda against Colombia. In addition he selected several players with extensive experience, including Patricia Garcia, Anne Fernández de Corres, María Calvo, Anna Puig, María Losada, Lucía Díaz and Olivia Fresneda

The Lionesses started the game by putting the Dutch under pressure, taking advantage of the very strong wind in their favour. A deep kick by Patricia García was the origin of the first Spanish try, in which two of the debutantes were involved. Bruna Elías who began the move and Clara Piquero, who scored.

The Spanish constantly put pressure on the Dutch, forcing errors, and thus preventing them from giving inside their own 22. Another two tries were scored before the quarter hour. Bruna Elías, very active in those first sets, helped Patri García to her 42nd try and immediately after Beth Segarra who took advantage of a run from Léa Ducher.

The best minutes for the Dutch team came in the final minutes of the first period and the opening of the second, but were not enough to break the Lionesses defence

The Dutch have a powerful pack led by Sylke Haverkorn and at least on one occasion almost got the better of the Spanish. But the Lionesses managed to stop that Dutch momentum and, despite having the wind against them during the second leg, turned the game around.

The last quarter of an hour clearly showed the superiority of some Leonas who ended up passing by the tiring Dutch, absolutely exhausted by then, and easy prey for the speed and forcefulness of Clara Piquero, Julia Castro, Olivia Fresneda, Zahía Pérez and Anna Puig.