South Africa have won the African Sevens title for the tenth time – but again it was close. 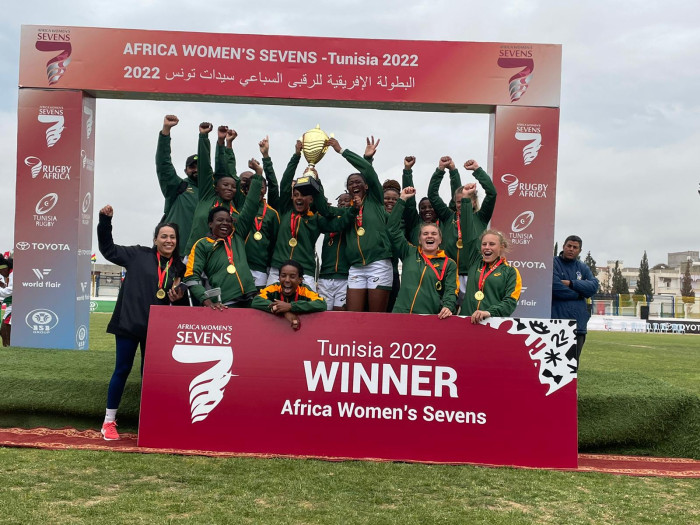 South Africa maintained their unbeaten record in the African Sevens, but the continents only contracted team were pushed all the way, winning by a single point in the final for the second tournament in succession.

But it was not expected rival Kenya who nearly snatched the title from them this time, but instead the continents fastest developing rugby nation – Madagascar.

This was the first African Sevens Final since 2019 and after the first two rounds had gone as expected, the competition caught fire at the end of the first day when Uganda shocked 2019 finalists Kenya with a 10-7 win – their first sevens win against their neighbours and rivals for ten years.

Madagascar then ended the day with and exciting 7-5 win against their Tunisian hosts.

With the quarter-finals on day two based on the pool results, these results dropped the most fancied pre-tournament teams from South Africa, Kenya and Tunisia all into the same half of the draw.

The quarter-finals opened with Ghana – one of the teams who had had to qualify for the tournament – giving South Africa plenty to think about before the ‘Boks were able to record a 17-5 win. Madagascar then just sneaked home against another qualifier – Zambia – thanks to two conversions after the teams ended two tries each. Uganda beat southern qualifier Zimbabwe 10-0, before Tunisia knocked Kenya out 19-5 – meaning that the Kenyans would miss out on the semi-finals for the first time ever.

Down to the final four, the ‘Boks put in their performance of the tournament to beat their Tunisian hosts 31-0 before a classic semi-final saw the lead change hands several times, before Madagascar and Uganda ended 12-12 at full time, the Madagascans tieing the game from the final play. Into sudden death extra time, a penalty and yellow card for Uganda gave Madagascar the advantage their needed to break Ugandan hearts.

With South Africa already in the Sevens World Cup as hosts it was a win that also saw Madagascar qualify for the World Cup, while Uganda’s defeat was enough to see South African make the Commonwealth Games (as Madagascar are not a member).

Tunisia swept to a 17-5 lead against Uganda at half-time in the third-place game, a lead that was just enough to hold off a Ugandan charge in the second half to win bronze with a 17-15 win.

And so to the final where Madagascar looked like recording a massive shock, leading 14-5 at halftime, holding onto that lead at 14-10 until the hooter when, on their own scrum, they contrived to give away a free kick and possession to the ‘Boks… who used that advantage to win the game.