South Africa have qualified for the final stages of the Africa Cup, winning their regional qualifier against Zimbabwe and Namibia. 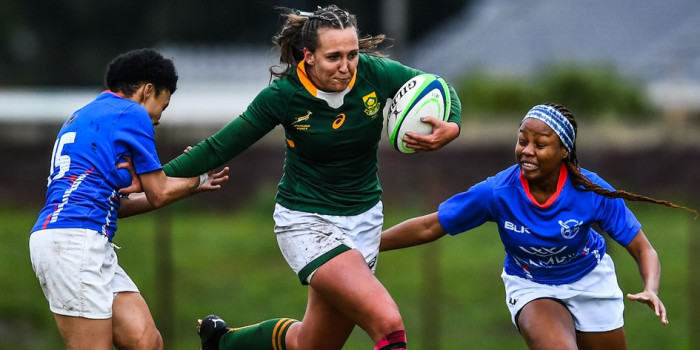 The Springboks have – as expected – won Pool A of the Africa Cup at a canter. Having beaten Zimbabwe 108-0 the previous weekend, they followed this with a 128-3 win yesterday (Thursday).

The Springbok Women scored their second successive century in the Rugby Africa Women's Cup when they beat Namibia by 128-3 in despite the rainy and very difficult conditions for the match.

They improved on the 17 tries scored against Zimbabwe with 20 against Namibia, to take the Boks to their highest winning score ever. Coach Raubenheimer had said they had hoped to improve on the world record score of 141-3, held by Netherlands over Denmark in 2004, but they just fell short.

“We missed out on the record due to a couple of errors, but I’m not concerned about that as there are lessons to be learned from those mistakes,” said Raubenheimer.

“We had some misfortune before the game when Lusanda Dumke was ruled out after a head clash in the warm-up, and then our captain, Babalwa Latsha was red carded early in the game due to a high tackle, and we had to play the rest of the game with 14 players.

“Both those incidents were valuable lessons for us on how to adapt when things are not going your way and I think we will be better because of it.”

Raubenheimer pointed to the weather conditions as another factor: “We had the warm-up in pouring rain, then the first half was played without rain and then it came down again heavily in the second half.

“We are likely to encounter similar conditions at the Rugby World Cup in New Zealand, so it was good for us to play in the rain, although our handling in that second half downpour was not as good as it can be.”

Raubenheimer said they wanted to work on their defensive lines from kicks, hence the original conservative approach to the first half: “We wanted to get those defensive lines up and running, but then our attack was so good that we hardly had to defend, which meant our original strategy was not practical anymore.

“We left a couple of tries out there, but that was expected given the conditions and the score line does tell the story,” added Raubenheimer.

Zintle Mpupha (centre) and Simamkele Namba (replacement back) scored four tries apiece, while Lerato Makua (lock) was named Player of the Match in her first Test start for South Africa.

Flanker Nokubongo Siko, who had to replace Dumke just before the kick-off, earned a first start and a Test match debut, as did prop Azisa Mkiva, who made her debut off the bench in the second half.

Five days before – on Saturday – Zimbabwe had met Namibia in the second game in the pool, with the “Sables” bouncing back from their heavy defeat against South Africa in emphatic style with a dominant win against Namibia in their second Rugby Africa Women’s Cup encounter at the City Park Stadium in Cape Town yesterday.

After being outclassed 108-0 by the Women’s Rugby World Cup-bound Springboks last week, Zimbabwe met the unknown Namibians for the first time.

They responded to their doubters in style after putting on an emphatic performance which showed the huge strides women’s rugby has been making over the last couple of years.

Playing an exciting brand of running rugby, the Lady Sables scored six tries in each half with impressive outside centre Chiwoniso Mabika, leading the onslaught with four tries which earned her the player of the match accolade.

Mabika ran in a hat-trick of tries in the first half tries as Lady Sables crossed the whitewash six times in the opening 40 minutes to take a 34 lead in the opening half.

Zimbabwe was equally dominant in the second half with Delight Mukomondo, Samantha Chirongoma, Caroline Malenga and Robyn Mhembere scoring tries as the Lady Sables dominated the Namibians.

While a key feature of the Lady Sables’ play was their ability to quickly recycle the ball and run it wide with skill and speed, their forwards also dominated their opponents both at the set-piece and on the breakdown.