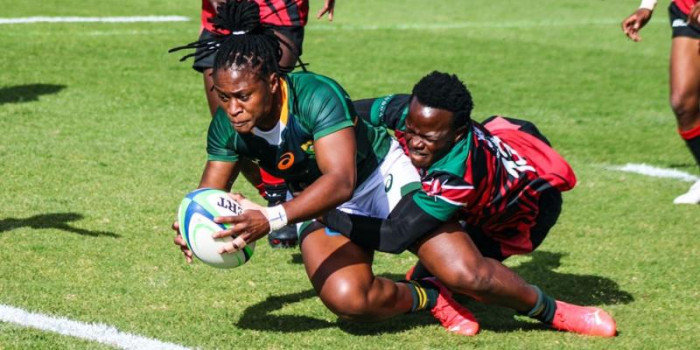 Kenya were well beaten 66-0 by South Africa in the first of a two-test series designed to warm them up for their World Cup qualifier against Colombia, planned for later this month.

South Africa scored 12 unanswered tries in the match in a test match played at Stellenbosch.

Zintle Mpupha scored four tries to lead the Springbok Women to a massive win in their first international outing in almost two years.

Kenya started the match well, keeping the ball through a number of phases, but the Springbok Women were not allowing them any spaces to score.

Mpupha scored the first of her three first-half tries from the first attack, with the ball sent wide after a good forward set-up and it was 5-0 after eight minutes.

A minute later she scored again - after good break down the right by wing Veroeshka Grain, before the ball was worked to the left and Mpupha went over in the same corner.

Grain then turned provider to send fullback Eloise Webb over in the corner for the first of her two tries. Flanker Lusanda Dumke had a strong burst which had the Kenyan defence under pressure and from the resulting play, Webb found space to score.

Kenya started to gain some ground in the game, mainly by using their pack of forwards, which forced SA into conceding penalties.

It also stopped the local side's scoring spree, but only temporarily as Grain was sent over in the corner after a lineout win near the Kenyan line.

The ball was moved swiftly and with good passing to the right and after 25 minutes, Grain added the fourth try of the match.

Webb scored her second 29 minutes in. The Bok lineout drive was stopped, but when the ball was moved to the back, Webb joined the line at the correct moment and angle to beat two defenders to the line.

Mpupha converted for a 27-0 lead, before she went over for her third try just before the break after the South Africans kicked ahead and won the race to the line.

Solontsi scored from a powerful Bok scrum to bring the half to a close.

The second half started in the same try-scoring fashion. Jacobs scored a quick try from close range before inside centre Chumisa Qawe’s hard run resulted in her five pointer, which was converted by Mpupha to take the lead out to 49-0.

Mpupha then added her fourth before she was given a well-earned rest.