The first round of the new Allianz Premier 15s season began with wins for Saracens, Gloucester-Hartpury, Loughborough Lightning and Harlequins. 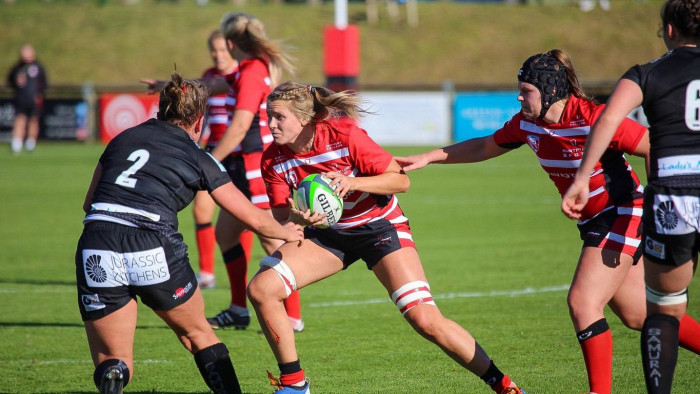 The league has returned with new rules designed to reduce face-to-face contact between players and the impact was immediate with some games recording barely a handful of scrums, with quickly taken free-kicks rife and with plenty of tries on show.

Pleasingly, three of the four games played at the weekend were live-streamed with the official feed coming at the game between Gloucester-Hartputy and Exeter Chiefs and with Saracens and Sale Sharks organising their own feeds so fans could watch the action.

Saracens started the weekend off with a win over a much improved Worcester Warriors side, who were in the game right till the final exchanges.

Robyn Wilkins opened the scoring for Worcester with a penalty but Georgia Evans retrieved the ball from the restart and set the hosts on their way, leading to Poppy Cleall driving over from close range. Warriors were quick to respond with Alex Matthews’ burst and offload sending Carys Cox under the sticks, however Saracens almost immediately retook the lead.

Evans was involved again and hooker May Campbell was on hand to burrow home with back up from her teammates in black.

Such was the topsy-turvy nature of the contest, winger Zoe Heeley squeezed in the corner for Worcester to make it 15-12 to the away outfit and would have taken that slender advantage into half-time if not for Rocky Clark’s late first-half finish.

The second half began as the first ended – with a try. This time it was against the run of play as Victoria Laflin picked off a Sarries pass and sprinted in from the halfway.

Then it was Saracens turn to cross. Holly Aitchison’s pass was key to releasing flyer Georgie Lingham on a trot for her first of the match and fly-half Zoe Harrison’s brilliant touchline conversion turned the score on its head once more.

Worcester secured a bonus point try on 54 minutes when Wales international Carys Phillips went over from the back of a maul but it was Saracens who ended the game in strong fashion with two tries.

First captain Lotte Clapp went over in the wide channel and shortly afterwards Lingham bagged her second to seal a 34-25 win.

This game saw newcomers Exeter face off against head coach Susie Appleby's former side. The hosts started well when Kelly Smith grabbed the first try and the second score came from the back of a driving maul with Hooker, Connie Powell powering over.

Exeter Chiefs answered back with their captain, Linde Van der Velden, who was excellent,  scoring the visitor’s first try with Taylor Black adding the extras.

In the second half, Gloucester-Hartpury were dominant and an early second-half score came from Zoe Aldcroft flying over the whitewash with Ellie Underwood slotting the extras.

Hannah Jones scored a powerful try from short range and securing the bonus point. Exeter found the try line once again through Kate Zackary and Taylor Black kicking the conversion, but Gloucester-Hartpury answered almost instantly with Daisy Fahey dotting down followed by Aldcroft’s second try of the game.

Fahey added the extras and secured the win for the Cherry & Whites.

The scoreline doesn't do justice to how well Sale Sharks played in their first appearance in the league but Loughborough's experience late in the game counted.

Sale looked sharp early on through the boot of Katy Daly-Mclean putting repeated pressure on the Lightning defence, but it was Lightning who got the first points on the board 12 minutes in, with Helena Rowland setting Olivia Jones up in the corner before adding the extras herself.

Lisa Neumann hit back for Sharks immediately taking the score to all square 7-7.

Looking threatening with ball in hand the Lightning forwards took the game to Sharks with Morwenna Talling and Rachel Malcolm carrying hard and , Lightning’s debutant Rowland broke the line, winning a penalty and securing the lead for the away team at half time.

Sale came out of the changing rooms firing on all cylinders but they could not convert their pressure into points.

With 10 minutes left on the clock Lightning found a new gear in their attack. Davies crossed the line from a maul and with minutes on the clock another driving maul from a lineout surged across the white wah giving Davies her second.

Collecting the kick-off Lightning pressed on, giving the ball to the forwards and with only seconds to spare Anya Richmond crossed the try-line, clinching the away win for Lightning 29-7.

A result that will not have done much to build the impression that the league is yet as evenly competitive as it needs to be, Harlequins ran in tries at will against a DMP side that will find the going tough this season on this evidence.

Harlequins flew out of the blocks, pinning DMP in their own 22 from a penalty with England international Sarah Beckett touching down from a driving maul.

The bonus-point came soon after with scrum-half Lucy Packer finding space out-wide and darting down the left wing, followed quickly by the electric winger Jess Breach who broke through for her first score of the season.

Beckett was over from a driving maul once again just moments later to extend the lead before it was Heather Cowell’s turn to cross the whitewash.

Scotland international Chloe Rollie rounded off the first-half, touching down after a quick breakaway down the right wing, with Scott kicking the conversion to take the score to 46-0 at halftime.

Quins didn’t let their foot off the gas after the break, driving DMP off their own ball at a five-metre scrum, allowing Konkel to touch down at the base for her second of the afternoon.

Shaunagh Brown was the next to go over, before Scott went over for her first try of the afternoon.

There were further scores from  Wilcock, Cowell, Abbie War Breach and Breach.