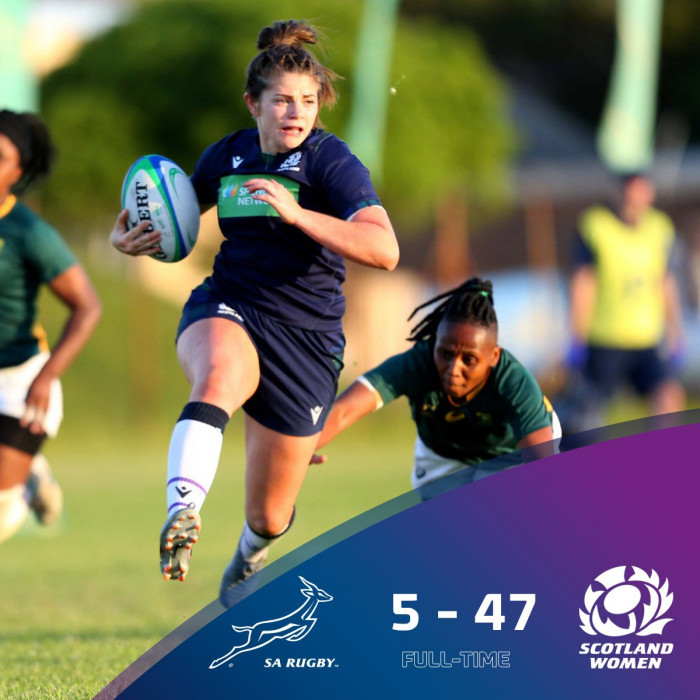 A blustery City Park in Athlone (a suburb of Cape Town), welcomed Scotland at the start of only their second ever overseas tour, and former Ireland coach Philip Doyle’s first match in charge. With the Six Nations and then the World Cup qualifiers to come next year it represented the start of one of the most important 12 months in the Scotland team’s history.

The game was also an important step forward for South Africa. While their place in New Zealand in 2021 is already assured after their African Championship win, this was the next step in their careful rebuilding of their test programme after the disappointments of the 2014 World Cup saw the SARU withdraw the team from international competition for four years.

Scotland, on the other hand, fielded an experienced team with all but replacement Christine Belisle having experience in last season’s Six Nations.

Spain began slowly in South Africa’s previous game, allowing the Springboks to gain an early advantage. Scotland, on the other hand, seized the initiative from the start. Despite playing into a stiff breeze, Scotland dominated the opening exchanges, with denying South Africa almost any possession. The Springbok penalty count, which had been a significant problem against Spain, quickly mounted as they had could find no answer to Scotland’s speed and handling. Rhona Lloyd and Chloe Rollie both crossed line in the opening 10 minutes to put Scotland firmly in charge.

Soon the ‘boks were in even more trouble as the referee showed a yellow card to debutant Chumisa Qawe for another high tackle, and within minutes Lloyd was dashing down the line for her second try and Scotland’s third before the game was 15 minutes old.

The final minutes of the half, however, were the best for the home team but a well organised Scots defence kept the home team at bay.

Within seconds of the start of the second half Gaffney broke through the ‘bok line for Scotland’s fifth try. After 46 minutes a break by wing Piwokuhle Nyanda put the home team’s No 8 Aseza Hele in for a try for the home team, but Scotland were soon on the attack again and another Springbok yellow card resulted in a Sarah Law penalty put the Scots 30-5 ahead. A few minutes later Lisa Thomson raced over for Scotland’s sixth try of the match, converted by Law, to extend the Scots lead to 37-5.

The second game in the two match series will be at the same venue on Saturday 5th October.