Scotland slipped to the bottom of the Women's Six Nations table as Italy secured their first win in this year's championship. 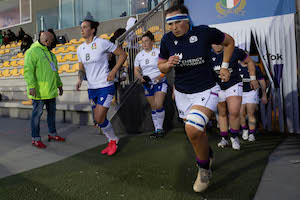 The Scots fell further behind when Silvia Turani grounded off a rolling maul and could only get back to 20-13.

Italy move on to four points, with Scotland gaining a second losing bonus point of the tournament.

Italy captain Manuela Furlan almost pierced the Scotland defence early on but ran out of play on the left.

The hosts lost Sofia Stefan to a knee injury, with Sara Barattin taking over at scrum-half, and Helen Nelson kicked the first points from a Scotland penalty right in front of the posts.

Further injury treatments for Italy interrupted the flow of the game just as they were beginning to enjoy some territory but Michela Sillari successfully kicked her first penalty to level the score.

Scotland gained the lost yards as they went through the phases in search of an opening try and Shona Campbell was held up on the left before a forward pass on the other side halted the advance.

However, a high tackle gave the Scots another opportunity from a lineout and, despite fierce Italian defence, Wassell grounded. The second row had missed the defeat by France but now had her fifth international try. Nelson converted.

Italy came out for the second half determined to turn their possession into points and got their reward. Vittoria Vecchini got within touching distance of the line and Bettoni applied the finishing touch. Sillari converted then put her side in front for the first time with a penalty.

Caity Mattinson, who had made her first start Scotland start in Parma, was replaced by Jenny Maxwell but the substitute scrum-half got injured in her first involvement and Megan Gaffney took over.

Gaffney was almost in for Scotland's second try after a few phases but was superbly forced into touch by Aura Muzzo.

It was as close as Scotland came in the second half as Italy consolidated their position with the Turani try, which followed a well-worked lineout.

Scotland won a penalty and took the points from Nelson's kick but could not carve the converted score that would have forced a draw.