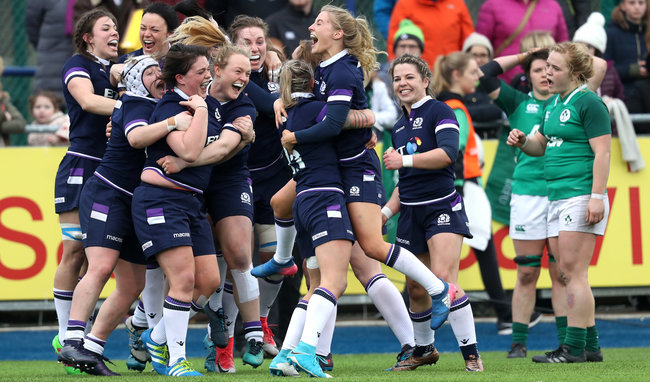 The Scots had won the sides' first 14 meetings between 1993 and 2006, but today's result marked the end of Ireland's 12-match winning streak in the fixture, with versatile forward Jade Konkel starring as the player-of-the-match.

Ireland's performance was quite a step backwards from their 35-12 bonus point victory over Wales, as a catalogue of basic errors blighted their play and too many of their key players fluffed their lines. Still, they fought valiantly and could have won it in the end.

This Celtic clash was a real arm-wrestle throughout, with Adam Griggs' home side starved of territory in the first half. Centre Helen Nelson's lone penalty had Scotland leading 3-0 at half-time, and she added a well-taken unconverted try in the 42nd minute.

Ireland's dominant scrum saw them hit back with a penalty try and Scottish loosehead Megan Kennedy was soon dispatched to the sin-bin after a series of penalties. Crucially, the hosts could not force a second try from the set piece, with Lindsay Peat's protests that she had grounded the ball in vain.

Indeed, during Kennedy's spell on the sidelines, pacy full-back Rollie picked off an intercept deep in her 22, outpaced the covering Kim Flood and sped away to score despite a last-ditch tackle from Hannah Tyrrell.

Lana Skeldon converted the 61st minute try to push the gap out to 15-7. Despite a Paula Fitzpatrickscore in response, Flood blundered when missing the straightforward conversion and Ireland were unable to get back into scoring range over the concluding 11 minutes.

In a lively opening to the game, which was watched by Michael D Higgins, the President of Ireland, and an attendance of 2,063, Ireland ran from deep as they released Megan Williams up the right wing via some crisp handling from backs and forwards.

A crooked lineout throw by hooker Skeldon blew an early try-scoring opportunity for Scotland, five metres out, but Aoife McDermott came in at the side of a seventh-minute ruck, allowing Nelson to open the scoring from straight in front of the posts.

Scotland had the better of the first quarter, aided by their accuracy at the breakdown and some evasive running from the likes of Rollie and Hannah Smith out wide, although Skeldon misfired a second time at an advanced lineout.

Ireland's discipline was letting them down as they leaked six penalties up to the 21-minute mark. Fortunately, Nelson's second penalty attempt was pushed to the right of the posts. Referee Ian Tempest's whistle made for a stop-start contest, with some scrappy passages of play, yet Claire Molloy and Irish captain Ciara Griffin were growing in influence at the breakdown, winning a couple of penalty decisions near halfway.

Katie Fitzhenry had a near-interception and although Scotland still had most of the ball, there were some bright moments for Ireland with a McDermott-led choke tackle and their powerful scrum eventually gaining a penalty in the 33rd minute.

Winger Williams was central to an encouraging finish to the first half from the girls in green. She wrestled for possession and raised the decibel level with a determined kick chase. However, there were some uncharacteristic handling errors from Sene Naoupu and Niamh Briggs, the latter one at the end of a promising spell sparked by number 8 Fitzpatrick's rip in the tackle.

Scotland started the second period with a bang, forcing a turnover and with replacement scrum half Jenny Maxwell providing a snappy service, they worked some space on the left for Nelson to crash over. She missed the conversion at 8-0.

Ireland responded through their forwards, marching Scotland back in a penalty-winning maul. With the home crowd growing louder, the pack went for the jugular but flanker Griffin, having broken from a maul, was held up. From the resulting five-metre scrum, Ireland successfully shunted the Scots backwards and referee Tempest rewarded them with a 49th-minute penalty try.

The hard work put in with new scrum coach Mike Ross is clearly paying off as Ireland continued to go the direct route through their forwards, including Cliodhna Moloney who made carry after carry. Nonetheless, Scotland remained dangerous on the counter with Naoupu reacting smartly to catch Liz Musgrove with a vital tackle.

It was Scotland's turn to leak penalties, a Fitzhenry break getting Ireland back into a decent position before prop Peat was denied her try, with the English referee ruling that she was 'initially held up'.

Griffin was also thwarted from the resulting scrum, and while Leah Lyons' scrummaging drew a yellow card against Kennedy, Konkel's move from number 8 to loosehead managed to steady the visitors' scrum and keep Ireland out.

When the hosts went wide, Flood's pass was slightly behind Tyrrell and Scotland were able to pinch a turnover. It was not long before Ireland were knocking on the door again, Briggs knocking on but her forwards winning a scrum against the head.

Summing up a hugely frustrating afternoon for her team, skipper Griffin's attempts to move the ball to Naoupu resulted in a high and loose pass which Rollie gobbled up and her blistering pace took her away from Flood and saw her outlast the chasing Tyrrell.

At 15-7 down, the mistakes kept coming from Ireland and even experienced openside Molloy, who excelled in the two home wins over Italy and Wales, was guilty of knocking on after a Griffin break.

Their persistence paid off when Fitzpatrick barged over to the right of the posts, with Ashleigh Baxter and Nicole Cronin both making an impact off the bench. Flood miscued the conversion, though, and Scotland had a three-point lead to hold onto.

Even better still for the visiting supporters, Shade Munro's charges threatened to kill off Ireland's challenge with captain Lisa Martin kicking cleverly for territory and then almost converting an overlap for a try - replacement Louise Galvin got her hand in the way of the pass.

In a tense conclusion, Ireland's high error count continued to play into Scotland's hands. Eager scrum half Cronin knocked on at a scrum and then gave away a needless penalty a few phases later. The Scots deservedly prevailed in the end, disrupting a last-minute Irish lineout and kicking the ball dead to spark joyous celebrations.