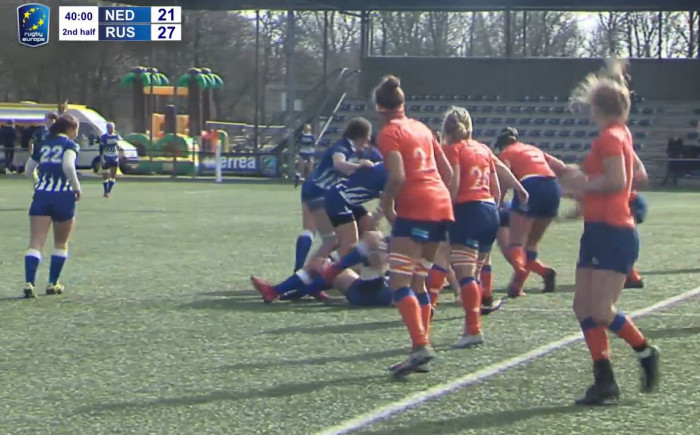 Needless errors lead to the opening Russian try after just two minutes. The Dutch first put themselves under pressure from the kickoff, which they allowed to go into touch on their own 5m. Unable to clear very far, despite winning their own throw, the gave the Russians a line out, where they were penalised for closing the gap. Russia immediately chose the scrum rather than a free kick. The worked the ball quickly right, and after a couple of pick and goes Ekaterina Bankerova drove over for the opening score. The Dutch were 5-0 down having barely touched the ball.

The Russian continued to dominate possession and territory, the Dutch not helping themselves with often unforced errors and ill-directed kicks, and after 12 minute Russia were rewarded with a penalty from Alena Dammer to increase their lead to 8-0.

Russia were now playing with great confidence, and another Dutch error gave them their second try after 22 minutes. The bounce of a well-weighted kick-through by Dammer confused a Dutch player on the line and Ekaterina Mikhaleva raced through to touch down. The conversion hit the post. 13-0 to Russia.

Another perfect kick ahead, this time from Alina Arterchuk, resulted in a third Russian try just before half-time, Natalia Kostina winning the race with Angelina Stolk to the ball, Russia going into the break 20-0 ahead having had the better of their host in all phases of the game. At that point it seemed that the game would only go one way.

The second half found a changed Dutch side, retaining the ball better, and spending much of the game at the Russian end. However, after 20 minutes of play they had still not managed to get on the scoreboard. But a great passing move found Noa Donkersloot n the right wing who cut through tp score, running round under the posts to make it easier for Marsha Volker to add the conversion. 7-20.

Then with 15 minutes to go Jordan Heil ran a terrific line, slicing through the Russian defence to score under the posts. 14-20.

Then, almost from the restart, a near carbon copy try, this time captain Linde Van-Der-Velden breaking the Russian line, touching down under the posts. 21-20 to the Dutch with now 13 minutes to go.

The Dutch needed to see out time, and with five minutes left won a line out near their own 22m line. But a knock-on gave Russia a scrum, the ball was worked left to Iuliia Rudenko who perfect sidestep left two tacklers in her wake as she sprinted away from a despairing Van-Der-Velden. With the conversion Russia were now 27-21 ahead.

It was now Russia’s turn to see out time, and they did this by going on the attack, returning the game to the Dutch end and nearly adding to their score before the final whistle went to end a match full of drama.

Both teams now have to meet Spain, with the winner qualifying for the next stage in Europe’s World Cup qualification process.