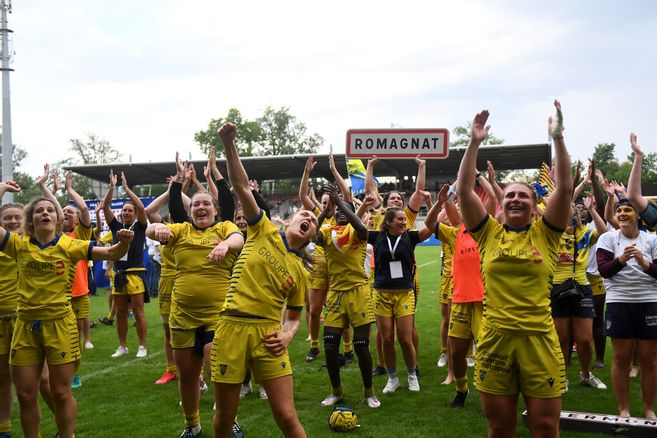 AS Romagnat, from Clermont in the Auvergne, are the new champions of France, winning their first national title since they won back-to-back titles in 1994 and 1995.

One of the oldest women’s clubs in France, Ovalie Romagnatoise Clermont Auvergne (to give it the full name first adopted in 2000) was formed in 1974 by a group of nurses and physiotherapists and was one of France’s leading clubs in the 1990s. However, it dropped out of the top level early in the current century and the club only returned to the top level as recently as 2016 – and came very close being relegated straightaway.

Romagnat’s triumph appeared unlikely even a few weeks ago. The Elite 1 championship had started in September and, until the start of the Six Nations break, looked like being a repeat of the 2018 and 2019 finals between Montpellier (who had missed only once final since 2007) and Toulouse.

However, when the league returned after the break  Montpellier and Toulouse suffered their first defeats of the season. They had, however, done more than enough to reach the semi-finals in the playoffs.

These games were played last weekend. Toulouse were drawn against local rivals Blagnac. Camile Imart had the scoring for Toulouse with an 11th minute penalty, but a try from Blagnac wing Sarah Aguado after 29 minutes enabled Blagnac to go into the break 7-3 ahead. A tight second half followed, and after 76 minutes it looked like Toulouse had stolen the game with a try from Imart, but from the final play of the game replacement wing Melissande Llorens scored for Blagnac to give them a 12-8 win, and a first ever final – moreover a final that would be played on their home ground.

The other semi-final between Romagnat and champions Montpellier was equally close. A tight first half ended 6-3 in favour of Montpellier, two Montserrat Amedee being balanced with a successfully kick from Jessy Tremouliere for Romagnat.

The first minute of the second half saw a second Tremouliere try, levelling the score, followed very quickly by converted try from wing Salome Perraudin. Amedee slotted a penalty soon afterwards, but on 50 minutes a try from replacement Romagnat hooker Caroline Thomas put Romagnat 20-9 ahead. Montpellier battled hard to get back on terms and there was only five minutes left when Caroline Boujard’s try  pulled them within four points. A tense final few minutes were scoreless and Romagnat were through to the final.

That final took places yesterday. After a scoreless first half, a converted try from Elise Pignot two minutes into the second half broke the deadlock and put Romagnat on the board. Audrey Abadie pulled Blagnac back to 3-7 with a penalty ten minutes later after which Romagnat defended their lead until the 66th minute when replacement Blagnac prop Celia Domain received a yellow card. Jessy Tremouliere converted the penalty and Romagnat were seven points ahead again.

Romagnat failed to take further advantage and – just as Blagnac returned to 15 – Romagnat captain and number 8 Lea Gabriagues was shown a yellow. Four minutes were left, and Romagnat lead by 10-3.

Into the last minute and Amelie Mugnier scored for Blagnac, but with the conversion missed Romagnat were hanging on by two points. Down to the final play the restart went Romagnat’s way, a penalty was won, Tremouliere converted it and Romagnat were the French champions.