After a tight opening, England found another gear to score 10 ties against Wales in front of a 14,689 crowd at Kingsholm, Gloucester – the largest ever crowd for s standalone women’s test match outside France. 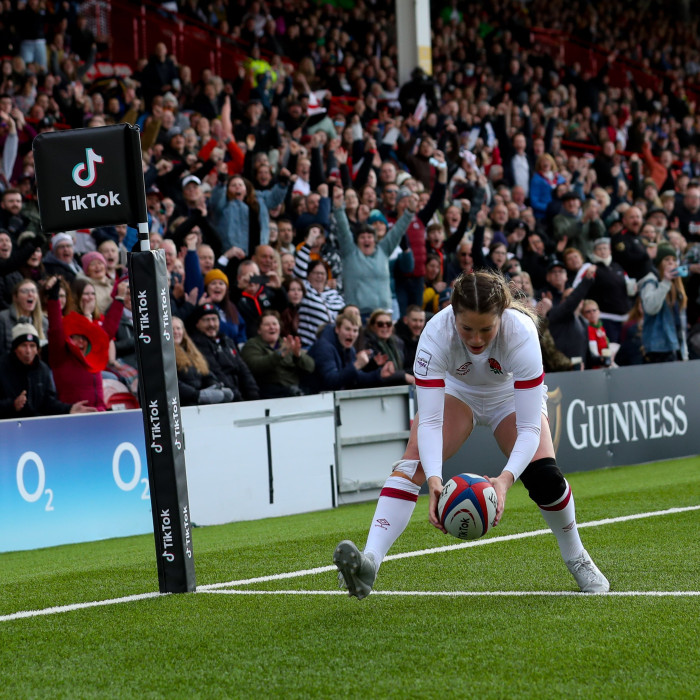 A packed Kingsholm saw England score seven second-half tries to round off a very impressive 58-5 win in the third round of the Six Nations – England’s 21st consecutive test win.

The size of win was all the more impressive after an opening 10 minutes which saw Wales hold England at bay like not side has managed, perhaps since France last year. Ever visit by England inside the opposition 22 has resulted in the coming away with points this season, but not this time.

The turning point was perhaps the injury to Abbie Dow after 14 minutes. After a long delay England responded best and scored almost immediately, Lark Davies touching down after a 10m maul.

England now seemed to find another gear, moving the ball quicker and pressuring Wales when they gained any possession. And Abbie Ward added a second try on 21 minutes.

Wales were still defending well, and it was not until the 35th minute that Jess Beach added a third try for England, but that was the end of the scoring for the opening period, England going into the break without a bonus try yet scored for the first time this year.

The second half saw England take full command. Lark Davies repeated her first half try within five minutes of the restart, after which Breach scored her second on 52’.

A great move by Sarah Bern, peeling round the front a lineout from which Wales were expected a maul gave England their sixth try on 56’, and Alex Matthews added the try of the game with a barnstorming touchline on 64’.

A very rare Welsh visit to the England 22 saw the take full advantage with a well taken try by Kelsey Jones four minutes later, but England responded almost immediately  from Shaunagh Brown (71’), followed by Emily Scarratt (75’) before Sarah Hunter ended the game with her team’s tenth score from the final play.

It is a mark of England’s strength that the scoreline does not show how well Wales played. When England started slowly against Scotland in round one it was mainly their own doing, but here it was Wales who initially knocked England off their stride. The difference in the end, perhaps, was between the team that has been professional for only a few months and one that has been professional for some years.