What is being hailed as the first women’s test match to be played in South America takes place on Sunday – although ongoing research suggests that this may not be the case. 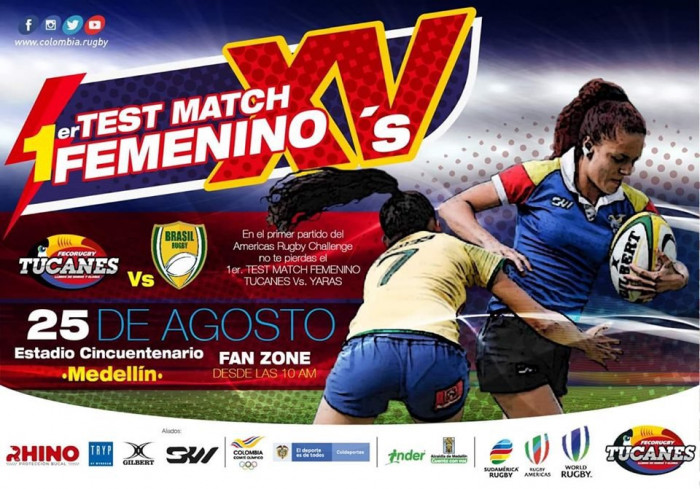 Colombia meet Brazil in a test match in Medellin on Sunday in a game which was – until yesterday - being hailed at the first women’s test match ever to be hosted in South America (discounting Guyana – geographically in South America, but politically part of the North American confederation – who hosted the NAWIRA test championship as long ago as 2008).

In addition, in 2010 Colombia beat 27-5 Venezuela in Bogota in the final of the Iberoamericano tournament but although both teams were official selections, the match – which was part of a tournament involving club teams, including at least one from Spain - was not given test status.

Fifteens rugby rapidly faded away after 2010 with the announcement of the Olympic sevens programme, though interest in the full-length format has continued in Colombia, in addition to which there have been calls from clubs in Brazil to be allowed to play XVs for some years with little encouragement from the Brazilian union until very recently.

However, publicity for Sunday’s game has resulted in a number of Colombian players discussing on social media test matches against Venezuela which apparently took place in 2003. At the time of writing little more is known (other than Venezuela winning at least one of the matches), but it is hoped more will be discovered over the next few weeks.

In the meanwhile, what must now be described as the rebirth of South American test rugby takes place on Sunday. The game takes place as both teams work towards next year’s first South American championship, which brings with it the chance of a playoff game against Kenya and a chance to win spot in next years repecharge for the 2021 World Cup.

As things stand that championship may just be a repeat of Sunday’s game. Efforts are ongoing develop a team to represent Argentina, but this was not recognised in recent communications from Sud America Rugby. In addition the political crisis in Venezuela has prevented their participation for the time being.

Players in Colombia have been drawn from five regional league and includes Leidy Soto – one of the “unstoppables” in World Rugby’s recent women’s rugby campaign:

Brazil coach Reuden Samuel has selected a team that includes one player from the Netherlands game 11 years ago - Andressa Contreras. Two players have played Olympic 7s - Raquel Cristina Kochhann and Isadora Cerullo and five more who played in the recent Pan American Games 7s, where Brazil lost to Colombia in the final.