England and Canada go head to head today in London in the first of three tests this Autumn. (Allianz Park, KO 19:30, live stream on Englandrugby.com). 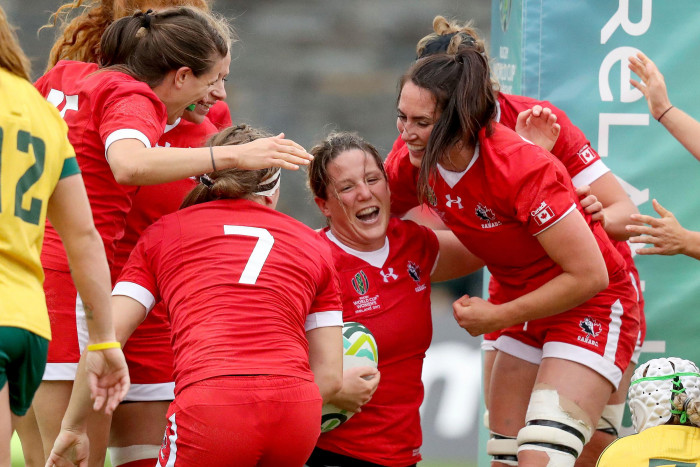 While both sides have named a raft of new faces, it is Canada who are the lightest on experience with some 162 caps in their matchday squad compared to England's 834.

Seven players are in line to make their England debuts, while 14 players could represent Canada for the first time.

England's new faces include wingers Jess Breach and Abigail Dow, who are named in the starting line-up with five more debutants on the bench, while Canada's team includes six debutants in the starting XV and another eight on the bench. On top of that, Brittany Kassil, Jess Neilson and Anais Holly have been awarded their first starts for Canada, making this one of the more inexperienced sides that Canada have named in some time.

England's all round experience should make them too strong - with Katy Daley-Mclean organising at ten outside a well-established looking pack.

England coach Simon Middleton said “Our priority is to win the series and keep our winning momentum going from last season. With selection we said from the outset we would pick on form, selecting players who are playing outstandingly well for their clubs. It’s a strong blend of youth and experience.

“I’m excited to see what the new, young players will bring win terms of their skill sets and pace. As a group they are very accomplished and have earned selection based on merit. That’s real testimony to the pathway, the U20s and the work they have been doing in their clubs. Alongside our more experienced players we know they will be given a great platform to play off and we have full confidence they will showcase their talents.

Middleton added “We have had some great matches with Canada and we are really looking forward to getting the series underway in what we know will be a tough and physical encounter.”

Canada interim head coach Sandro Fiorino added: “With limited preparation time since landing in London, we will play to player’s strengths and focus on early positioning and reading cues from the defense and trying to find the space with strong skill execution,” said Fiorino from London.

“This will take time and organically grow. On defence, we’re looking for well-organised, pressure, disciple and to disrupt to create turnovers. We’ll have our hands full, but the ladies will put the best effort forward.”

“The goal of the tour is to determine where the gaps are in our game and really focus on skill development in all aspects of the game. We are blessed in Canada with great physical athletes, so if we can combine the two (skill and size) we should be in a good place moving forward.

"The goal of the programme is to work towards a podium finish at the next world cup, but it’s going to take a lot of work and effort from the staff and players to close the gap on the rest of the world; we’re up for the challenge,” added Fiorino.

The two sides will next meet in a midweek fixture at The Stoop on Tuesday 21 November, kick off 19:45, before playing in the series finale at Twickenham Stadium, kick off at 17:40 (live Sky Sports Arena & Sky Sports Mix) with free entry after the men’s game against Samoa.

England and Canada have faced off a total of 25 times, with England winning 21.  The two sides most recently met in Christchurch, New Zealand this year during the International women’s Rugby Series in June, with Canada narrowly losing 27-20.