Papua New Guinea were declared winners of the Oceania 7s after the tournament final in Brisbane was cancelled due to severe weather. 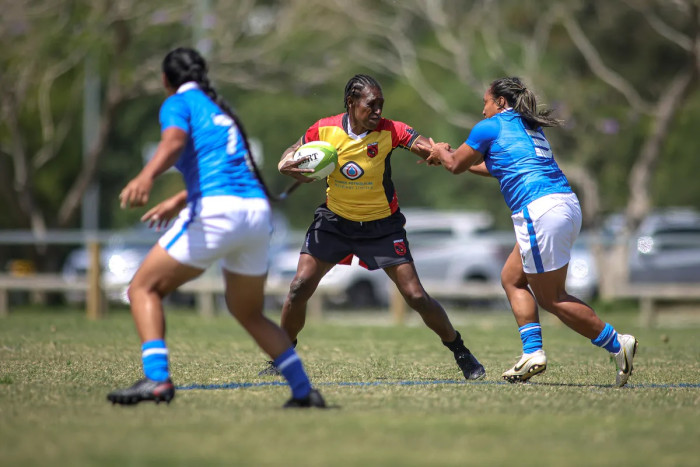 Six teams entered the tournament at Shaw Park in Brisbane, on 19-20 November. The teams played in a single pool, with the top two due to play-off in a final.

Papua New Guinea were the only unbeaten side after day one. Over three games, they conceded just one try, and this is after facing three of the best teams in the entire tournament. Thhis included a crucial 21-5 win against Samoa who had begun with a fifty-nine-point victory over Vanuatu, . Samoa finished the day with a comprehensive victory over rivals Tonga. Cook Islands also only suffered one defeat - to Papua -  after starting wiith a win over the Solomon Islands followed by an even more dominant performance over Vanuatu giving them back-to-back wins.

Day 2 of the Oceania Sevens Challenge kicked off with the remaining women’s pool games being played in order to sort out seeding for the finals.

Vanuatu entered day two knowing they had nothing to lose and everything to gain following some heavy losses the day prior, and their first performance against Tonga reflected this mentality. After conceding some early points, the Vanuatuan’s struck back through Hannah Taiwia, resulting in some deafening cheers from the Vanuatuan bench. Unfortunately, despite their best-efforts Vanuatu would go onto to be defeated by Tonga, as well as Papua New Guinea in their final match in the pool stages.

Samoa’s first match of the day was against an underrated Cook Islands side looking to cause some upsets before the finals. The Cook Islands came out firing in the early minutes, but just couldn’t crack Samoa’s formidable defensive line, and eventually Samoa was able to counter-attack through Linda Fiafia who raced down the sideline to give Samoa the lead. Ultimately Samoa prevailed over a gutsy Cook Islands side, as well as winning comfortably against the Solomon Islands to close out their pool matches.

Day two didn’t go to plan for the Solomon Islands. They were always going to have trouble coming up against Samoa and Papua New Guinea back-to-back to start the day, and to no one’s surprise they were on the receiving end of some huge scores.

The Tongans excelled in their last pool matches, putting on some serious clinics against their opponents. Against Vanuatu Fakanonoa Manumua was incredible, facilitating the girls around the park with amazing composure, allowing livewires such as Florence Hakalo to stun those in attendance with her incredible footwork. Vanuatu were able to put up a fight, however Tonga never looked nervous as they cruised to a win over Vanuatu as well as taking care of the Cook Islands to close out their pool matches.

Papua New Guinea breezed through their last matches in the pool stage, scoring points at will against Vanuatu and the Solomon Islands. Star player Naomi Kelly was up to her usual standards, demolishing defences with damaging runs.

Following the pool stage, each team was seeded according to their results, with two games dictating the final positions, before a thunderstorm washed out the championship final between Samoa and Papua New Guinea.

Next was an incredible example of free-flowing rugby between Tonga and the Cook Islands. Finding the lead first, Tonga was in the driver’s seat during the first half. However, within the first minute of the second half Tonga conceded a yellow card and try within the same play, leaving the door open for a Cook Islands comeback. Luckily for the Tongans, they were able to hold on long enough to secure a third-place finish, just scraping past the Cook Islands.

Unfortunately, the Women’s Sevens Challenge Final between Papua New Guinea and Samoa had to be abandoned due to sever weather. Therefore, in accordance with the Tournament rules, whoever scored the most points over the weekend would be declared the winner. Consequently, Papua New Guinea Womens were declared the winners due to having the most Tournament points during the pools and knock out rounds.

The official ranking for the Oceania Rugby Women’s 7s Challenge are as follows:

As the top ranked team in the Women’s Challenge, Papua New Guinea have qualified to represent Oceania at the 2023 World Rugby Challenger Series.