Packer: I want to be the best

As the number one ranked side in the world, England have been working hard under Simon Middleton to keep themselves ahead of the competition with just over six weeks until the start of the Rugby World Cup, writes Nick Heath. 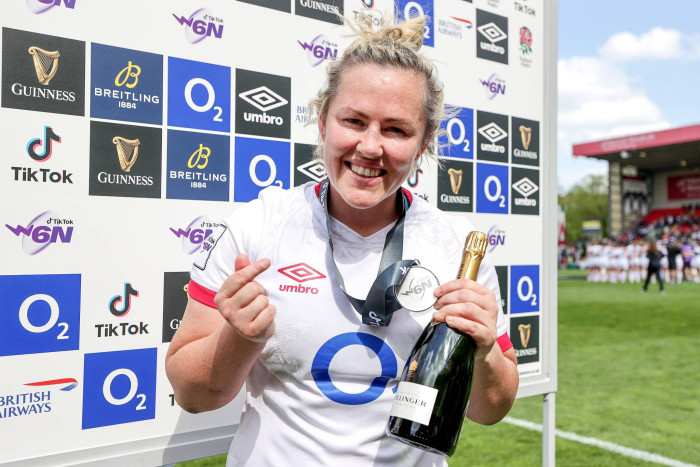 Coming to the end of their longest ever training camp, England’s pros will now have four days off before reconvening to take on the USA in Exeter (Sept 3rd) followed by Wales in Bristol (Sept 14th) in two warm-up matches.

For Marlie Packer, it will be a chance for some valuable family time.

Having been named England Women's Player of the Year at the RPA awards and Player of the Match when Saracens reclaimed the Allianz Premier 15s title in their final win over Exeter in June, the 2014 world champion is in the form of her life. As she prepares for a third Rugby World Cup, it is life away from rugby that is helping her keep her eyes on the prize.

Packer said, “I’ve got Oliver now. It gives me that time to switch off between being Marlie Packer the rugby player and Marlie Packer the mum. My life balance is in a good place and that’s obviously helped. Before I used to worry about what the coaches thought about me and my nutrition – I used to worry about everything. It revolved around this rugby world but now it’s not the case. Of course, I still worry – that’s natural – but Oliver comes first and that’s that really.”

The final squad of 32 players will be named on September 20th with players set to depart for New Zealand shortly afterwards. With a young family, the delayed 2021 tournament comes with its own challenges.

Packer explains, “It’s going to be quite different. The last two World Cups have been in France and Ireland. You can get a flight or a train there quite easily, but this one’s in New Zealand – completely different time zones. We got told last night that one of the hotels we’re going to basically doesn’t have wifi and barely 4G and I think we’re there for about a week and a half. That’s going to be tough going.

“I always knew when having Oliver that I was still going to be a rugby player and that it will take me away from him. As long as I come home with that trophy, right?”

With 83 caps, Packer is one of nine world champions from 2014 in the wider squad of 39 players that have trained at England’s Pennyhill Park base. She will turn 33 ahead of the start of the World Cup and despite having a gold medal from eight years ago in the cabinet, her competitive edge needs no sharpening.

Packer enthuses, “Most of all for me, it’s about how I play and I want to be that best player in the world. I love winning. I play for Saracens, we barely lose. I’ve just got that winning mentality. Going to this World Cup, I want to go and put wrongs right from the last one but actually, I want to go out there and be the best openside flanker there is and help England win that World Cup trophy.

“We just need to make sure we go out and enjoy it. When we’ve got a smile on our faces and we’re enjoying what we’re doing, that’s when I say any team plays their best rugby. These Red Roses right now, that’s when we’re at our best. We’re on a run of 23 games. We’re enjoying it but we’re pushing each other to be the best that we can be.”