Over the course of the Pacific Fours competition, we’ll be speaking to coaches and players involved across the matches in New Zealand. First up we had a quick chat with Black Ferns’ assistant coach Whitney Hansen. 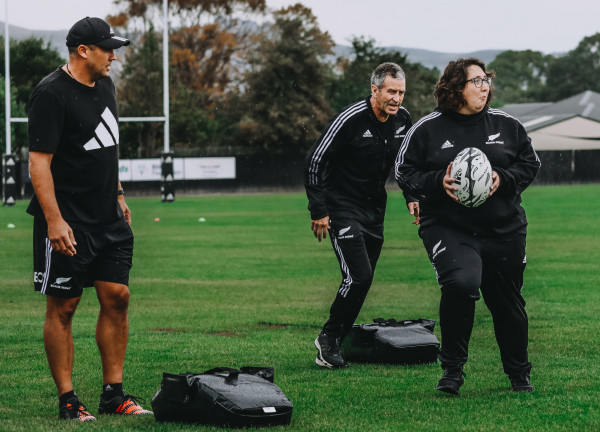 Hansen was recently promoted from her position as an ‘intern’ with the team, where she’d been taking part in World Rugby’s Coaching Internship Programme, to the fulltime assistance coach in a new look team led by Wayne Smith. New Zealand play Australia tomorrow in game one.

It’s been three years since the Black Ferns played at home, how is everyone feeling?
There is a real excitement in the air around getting to put out on the grass some of the things we’ve been working on over the last month or so, which we are all looking forward to.  It’s huge having this here at home and having friends and family and New Zealand fans being able to be part of it too. It feels like they have been caught up in the excitement and we can’t wait to get out there.

How different will the team look from the one which struggled so much last year?
There has been some significant change in and around selection but also we have had an opportunity this year to have a really good look at who is going to put their hand up around New Zealand to be part of this team.

We have some new and young players who will be hoping to showcase that alongside the experience we already had. In terms of how we play – I am hoping it will look quite different and be a refreshing and exciting game for our supporters to watch.

What are you expecting from Australia in game one?
We have been fortunate to see them play a few games against Japan and Fiji, so we have had been able to look at that pretty closely. We know they will have been working pretty hard on improving but we can see that they are trying to play fast rugby and with a lot width so it’s up to us to make sure that doesn’t happen.

How are you adjusting to the new role?
It’s all happened very quickly, but for me the role beyond the title hasn’t changed too much. I have always been about continuing to want to better myself and be the best in front of the people I am working with. Although some of my profile has changed slightly in terms of what I am looking after, me wanting to improve hasn’t changed and so it’s been good just to be able to get even more stuck in.

What kind of coach are you?
That’s a big question! I am not the coach that is there to have a picture with a trophy, that isn’t why I do what I do. For me it’s about growing people and that’s people as rugby players and as people off the pitch so that guides who I am and what I stand for as a coach.

That is something that has been important for all us of in this coaching group. Allan Bunting has come in and be part of that work and that is a huge strength of his so I am excited for that to be part of what we all do.

How’s it been working with people like Allan and Wayne Smith?
Allan’s role is in and around the culture and environment and he’s also been working with our leadership group. He has done some great stuff already and looked at what we stand for and he’s helping grow a real connection in and amongst the group. That’s been really strong.

In terms of Wayne – he’s got a real different take on how we are going to play the game and some unconventional ways of training to go alongside it. I wouldn’t call what we are doing a traditional model of anything, but the girls have been really excited about that it’s been really refreshing for all of us.

What do you mean by unconventional?
I guess there is a piece around how we play the game and therefore how we train – how we use analysis and then tie that into our strength and conditioning programme. How that manifests as an outcome – well that is something for people to look forward to hopefully!

The players turned more fully professional at the start of the year, what difference has that made?
It’s a gamechanger for the players.

The biggest change is they are not having to get up at 5.30 in the morning and finish off their training at night after work. It is their day job now. We haven’t got it all right – this is still in its infancy and there is stuff to work out, but on the whole most of them are training during the day as their job, so that ability to focus on one thing means we’ve seen some massive gains in areas like skillset, athleticism and technical understanding of the game.

Ruby Tui is in the squad and she’s lived the life of a professional player for some years, has she been able to add some extra value in that respect?
She’s lived in that space that sevens has gone before in and around going professional so she is a great role model around professionalism and what is needed to be successful at that level.

Personality wise she is super positive and massively bubbly and is an exciting person to be around.

Are you confident you can close the gap with teams like England in time for the World Cup?
It won’t be an easy feat.

Those teams who beat us last year are also going to be getting better and they won’t be sitting back on their laurels waiting for us to catch up. We’ve got the time we’ve got and we will put in everything we can to turn it around and show what we can do

How important are interventions like the internship programme?
Huge.  At the moment things aren’t equal and we don’t have many women in this space so to have opportunities to get in there and be seen has been awesome. We need to continue to have more of those opportunities to help even things up.

The network of coaches you get to know has also been awesome. Before the programme I had no idea who many of these people were as we hadn’t connected yet so the ability to learn off each other has been really powerful.

Do you feel an extra responsibility now you’re in the role you’re in to do what you can to promote women in coaching?
That is part of parcel of being a woman in coaching just like it is being a female athlete.

When you get opportunities to showcase and share stories of what’s happening out there and share success stories of pathways, that is a responsibility that I understand and care about. I am not the hugest fan of profile or media interviews, but I know that is a necessity because we need people to see these stories.