Most of the potential Olympic medallists were in action this weekend – so how did they get on, and what did we learn. 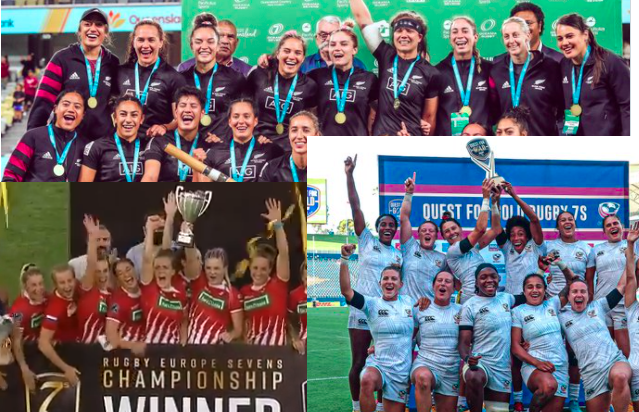 Russia strolled to another European Championship, made all the easier this year by the absence of five teams from the competition, including their greatest rivals, France, and England.

The Russians won at a canter, but it is difficult to say what we or they learnt from another tournament win. The Olympics will be a significant step up and, while there was a good deal of squad use, conceding 14 points against Portugal (who should not have been playing in the Championship at all, without the five withdrawals) suggests some possible fragility in defence (or perhaps a loss in concentration).

Scotland – without their GB players – reached the finished third, and fourth overall, which looks good for the future and ambitions to win a World Series spot. They were pipped for second place (and second overall) by Poland who saved their best for the final three-team medal pool, beating Scotland 29-14 in the silver medal decider. Despite a disappointing fourth place this weekend, Spain ended as overall third.

United States and Great Britain met in the final World Rugby-organised warm-up tournament in Los Angeles. With Kenya pulling out the day before, USA Rugby managed to draft in Mexico as a replacement to play alongside Jamaica. Both are significant powers in the region, but well behind the USA and GB who dismissed them with ease. USA then beat Great Britain 26-7 to end the first day.

The size of the victories against Mexico and Jamaica resulted in a restructuring of the second day, with idea of a four-team tournament was set aside and instead the USA and Great Britain meeting in three more games, the USA winning two with the final one drawn.

Finally, Australia, New Zealand and Fiji met in Townsville for the Oceania 7s, with numbers being made up by an Oceania Barbarians selection. New Zealand were on a different level to their opponents, including their Australia hosts who they beat comfortably 34-5 and 26-5, and ending with a +162 points difference over their six games. Australia also lost one of their two games against Fiji, who look very capable of recording similar “surprise” results in Tokyo.

Where does leave the likely direction for medals in Tokyo? Based on what we have seen this weekend it is very hard to see anyone stopping New Zealand making up for 2016 and winning gold. Anything can happen over 14 minutes, but the way in which they dismissed two other Tokyo-bound teams with ease this weekend was very impressive.

The real scrap will be for the other medals. Here the great unknown will be Canada – who we have not seen in action for over a year – but from those that have been active perhaps France and the USA look the most on form, while Russia and Great Britain certainly cannot be discounted. And watch out for Fiji.