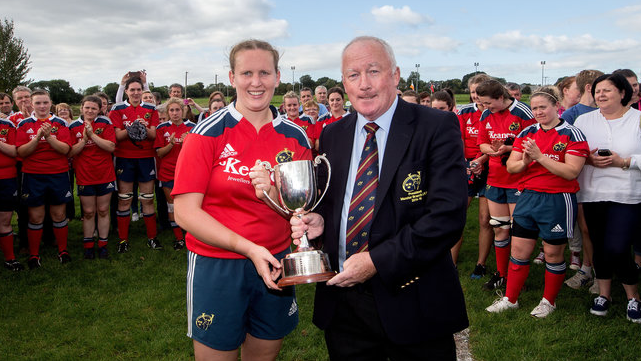 The final act of the game at Tralee RFC - a penalty from outside centre Ger Rea - secured the title for Munster who now been champions in seven of the last nine years.

The westerners looked as if they could claim top spot after opening the scoring in the 14th minute with a try from winger Jill Draper who finished off an overlap. Clare Rafferty converted with aplomb from a tricky angle.

Notably, these were the first and only points Munster conceded throughout the entire series.

In the second half the momentum began to shift in the hosts' favour. Rea's success from the kicking tee in the 45th minute closed the gap to four points.

As the Wayne Falvey-coached Munster side went on the offensive they had a number of chances. Openside flanker Ciara Griffin was forced into touch just short of the try-line and then Ireland international prop Fiona Hayes was held up.

Full-back Mairead Kelly managed to touch down for the hosts but her effort was ruled out for crossing. However, referee Helen O'Reilly awarded Munster a penalty and Rea (pictured below) managed to reduce the deficit to 7-6.
The match rhythm was somewhat broken when play was stopped due to an unfortunate injury sustained by Connacht try scorer Draper. The Tullamore player was stretchered from the pitch with a suspected broken leg.

Rea missed a penalty kick late in the game and it seemed that Connacht would hang on. However, the Highfield woman was handed another chance right at the death and made no mistake to complete a clean sweep of victories for her province.

One family who both celebrated the result and commiserated with the losers was the O'Mahonys Munster Branch President Mick Goggin was delighted to present the Interpro trophy to captain Laura Guest, who played for Ireland in the recent Women's Rugby World Cup. The Cork woman, who first played rugby for Clonakilty RFC in 2002, has now won ten Interpro titles during her 12 years as a Munster squad member.

In Ashbourne, Ulster fell to a third consecutive defeat against a classy Leinster team who finished the Interprovincial campaign in second place.

Inside centre Kim Flood  opened the scoring for the hosts with a try after five minutes. Ulster's out-half Jemma Jackson closed the gap with a penalty ten minutes later.
When Holahan crossed the whitewash on the hour mark, the match was over as a contest. Further Ulster indiscipline saw replacement Shirelle Wilson sent to the sin-bin by referee Joy Neville, the former Ireland number 8.

Just moments later Leinster scored their fifth try of the afternoon when Cooney got her name on the scoresheet with a fine pick and drive effort. Cill Dara's Aine Donnelly added the conversion for a 21-point cushion.