Munster and Leinster took the spoils in the opening round of Ireland's Interprovincial tournament. 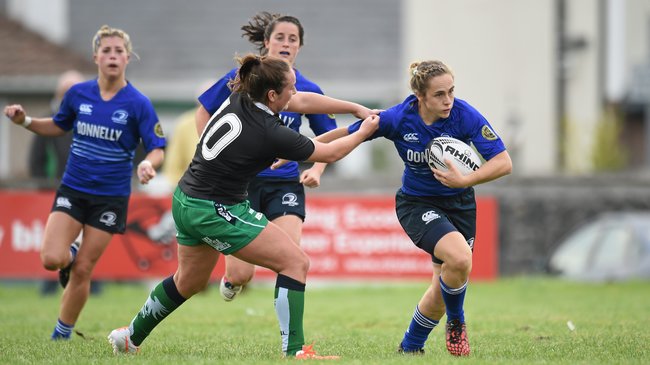 Defending champions Leinster included 13  players making their debuts in their round 1 win over Connacht, with both sides missing a raft of their Irish starts who are still recovering from the Women's Rugby World Cup.

Ex international number 8, Joy Neville,was the referee in Galway and it was the westerners who got off to a bright start with winger and Ireland Sevens international Niamh Ní Dhroma scoring after 16 minutes.

Despite Leinster only venturing into the Connacht half three times in the first 40 minutes, the visitors' stream of five lineout steals showed their class.

Leinster were level ten minutes into the second half thanks to a try from captain Ann-Marie Rooney.

With 20 minutes left on the clock, Connacht retook the lead via a penalty from the boot of Nicole Fowley.

Five minutes later Connacht went a woman down when prop Laura Feely received a yellow card.Robert Forbes' side used this to their advantage with Old Belvedere centre Elise O'Byrne-Whitescoring a try to put them ahead for the first time.

Full-back Vikki McGinn, who was part of Ireland's World Cup campaign, then showed her international credentials by scoring a match-sealing try just three minutes from time.

Ulster endured a difficult afternoon at Kingspan Stadium as a Munster side infused with both youth and experience ran out 22-0 winners.

Winger Deirbhile Nic A Bhaird made her Munster debut a memorable one with a try on the half hour mark.

On the stroke of half-time Ulster's Jemma Jackson had a chance to claim back three points but her penalty attempt drifted to the left of the posts.

Munster's fourth try came early in the second half as lock Gerda Coyne, another debutant, broke free of the defence to score in the corner.

Ulster's young side - coached by Jonathan Gillespie - grew into the game in the final quarter. During this spell Munster replacement Mollie O'Donnell was yellow carded but despite much endeavour the hosts were unable to break through a stubborn Munster defence.