Leinster have been crowned interprovincial champions after a tussle with three-in-a-row seeking Munster at Donnybrook, writes Aisling Crowe. 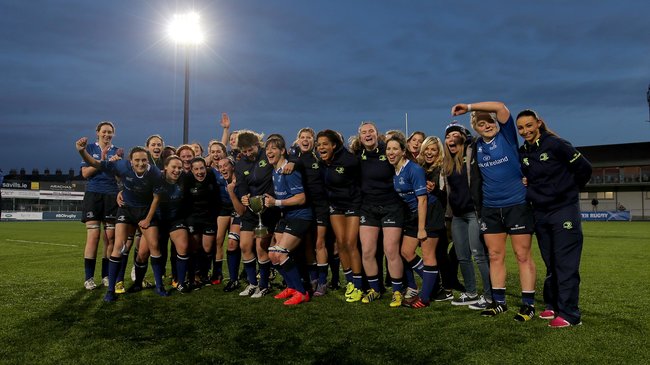 Munster began the match against Leinster signaling their intent to claim their third title in succession and dominated the early exchanges. However the home team settled and began to pressurize their opponents. Outhalf Hannah Tyrell kicked the ball to touch when Leinster were awarded a penalty in the 18th minute and from the resulting lineout, Paula Fitzhenry’s mazey run made room for centre Jenny Murphy to touch down for a try, which the Kildare woman converted.

Her partner in the centre, Michelle Claffey, got Leinster’s second try and again Murphy converted to leave it 14-0 at the break.

Munster were not in a mood to concede their title easily and seven minutes into the second half they were back within striking distance thanks to the UL Bohemians triumvirate of Niamh Kavanagh, Edel Murphy and Deirbhile Nic A Bhaird. It was winger Nic A Bhaird who scored the try after excellent play from Murphy and Kavanagh and Murphy converted to bring the score to 14-7.

A red card for Leinster’s Murphy for an off the ball incident looked to spell trouble for the home team but the 14 remaining players coped admirably without their outside centre, growing their lead thanks to a try from replacement hooker Caoimhe Molloy that was converted by Tyrell.

Munster struck back for a try in injury time but by then it was too late for the game and the title had slipped away by then. Leinster had grabbed both, the title by the narrowest of margins/

Connacht lost out on a first championship in two decades on points difference, despite running up a 27 point win over Ulster in Galway. A try bonus scoring performance wasn’t enough to bring the title over the Shannon but despite coming so close to success in his first year, Connacht head coach JP Walsh was pleased with how his team performed.

“The girls played really well and we just came up a bit short this time,” he said. “We let ourselves down a bit in Cork (against Munster) last weekend but the girls should be proud of themselves.”

The profile of women’s rugby is increasing in the province with underage competitions for girls teams and that is going to have benefits for the provincial side in the coming years. Rugby is on the up in the west and Walsh wants to ensure the women’s teams are part of that rising tide.

“We would like to keep everyone in place for next year. We go again and we know we need to step it up another level in 2017. We have great athletes in the group and when we pushed them, they responded really well. It might be greedy looking for the title in our first year but that was our goal for this year and it will be our goal for next year. If there are any girls around the country who would like to play provincial rugby for Connacht, they are very welcome to join us,” Walsh added