WIth wins at the weekend, it's a showdown between Munster and Leinster for Ireland's Women’s Interprovincial Championship - the four team competition which pits the country's best players against each other. 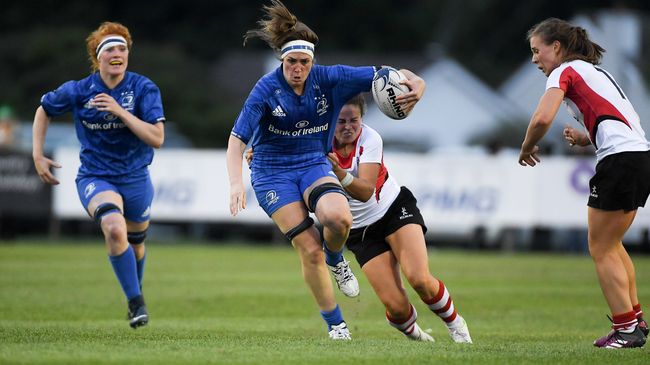 The weekend's results leave Leinster and Munster level on nine points, with the Blues top of the table courtesy of a superior scoring difference (+62 compared to Munster's +37). Entry to Saturday's title decider at Energia Park (kick-off 7.30pm) is free for Leinster Rugby Season Ticket holders and for those that present their ticket from Leinster v Dragons (kick-off 5.15pm) at the gate.

Leinster set up a winner-takes-all showdown with Munster in the Women’s Interprovincial Championship with a 47-0 win over Connacht at the Sportsground. Seven tries were scored, but Head Coach Ben Armstrong was more impressed with his side’s defence – Leinster have yet to concede a point in this year’s championship.

“It’s something that the girls identified during the week,” said Armstrong. “They celebrated more for a turnover down in the corner than the tries we were scoring. It’s something we’re aiming to do and something we’d like to keep going into the Munster match.”

The visitors used their wind advantage in the first half to keep Connacht pinned inside their own half. Linsday Peat crashed over from 10 metres out after seven minutes, taking the ball at pace to break two tackles.

Connacht were ambitious in their approach and looked to put width on the ball to gain metres out wide. Leinster’s line speed was causing problems and Peat showed raw pace to snatch an intercept in midfield and dot down under the posts.

Connacht’s first visit to the opposition 22 came after 32 minutes. They held the edge at scrum time but that attack was short lived and Leinster plundered two more tries before the half time whistle. Michelle Claffey capitalised on a Connacht fumble in the in-goal area before Hannah O’Connor scored from deep.

The expected onslaught from the home side in the second half was hampered by a lack of accuracy at key times. Leinster were clinical in how they punished any handling errors and Juliet Short slalomed through the cover and sprinted to the corner for her third try of the tournament.

Substitute Hannah Tyrell had a hand in the next two tries as Jeamie Deacom and Nikki Caughey both finished under the posts. Caughey hit her sixth conversion to wrap up the scoring after 55 minutes.

Connacht laid siege to the Leinster line in search of a score. They spent 12 minutes in the green zone and got the Clan Terrace rattling for the last quarter of the game. Captain Grainne Egan had failed a fitness test on Friday and couldn’t play, but they went close through Ciara O’Connor and Orla Dixon with Jill Draper coming off the wing to direct proceedings at scrum half.

Jarlath Naughton admitted “it’s a hard result to take,” as Connacht Women’s Head Coach. “Anything that could have gone wrong went wrong today and the result doesn’t match what we think of our players. We just have to look forward to next weekend. Ulster make the trip to Galway next Saturday afternoon to decider third and fourth place in the table.

The well-drilled Munster Women ensured the defence of their Interprovincial title will go right down to the wire after they reeled off six tries to defeat hosts Ulster by 20 points at Chambers Park, the home of Portadown Rugby Club.

Eimear Considine and co-captain Chloe Pearse both continued their try-scoring form from last week's 24-7 triumph over Connacht in Cork, while head coach Laura Guest was particularly pleased with the improvements in the set piece.

"We fixed the timing issues in our lineout and got some great front-foot ball off it," said the former Ireland international. "Likewise, we dominated the scrum and earned a few scrum penalties. Starving Ulster's set piece also allowed us to dominate possession."

Munster did not have it all their own way in the first, with Ulster fighting furiously for an Interpro win that has eluded them for a number of years. Unconverted tries from Cooke backs Vicky Irwin and Emma Jordan inspired hopes of a surprise result.

Winger Considine marked her first start of the tournament with a well-taken try in the corner after 10 minutes. Niamh Briggs, who tallied up 15 points, swung over a brilliantly-struck conversion and the momentum was really behind Munster after number 8 Pearse broke from a scrum inside the hosts' 22 and stepped away from the final defender to make it 12-0.

Those scores in quick succession from Irwin and Jordan ignited Ulster's challenge by the 25-minute mark, and captain Larissa Muldoon and her team-mates maintained a high intensity and level of accuracy, backed by the vocal home crowd.

Importantly for Guest's charges, they squeezed in their third try just before half-time to give themselves some breathing space at 19-10. The Munster forwards piled on the pressure close to the line, recycling in dogged fashion before Ballincollig lock Roisin Ormond forced her way over.

Two minutes after the restart, Pearse scored again from the back of Munster's muscular scrum to chalk up the bonus point, and it was the set piece which paved the way for try number five. Nicole Cronin sniped over from a five-metre scrum with Briggs knocking over both conversions.

Soon it was the former Ireland captain's turn to cross the whitewash, Briggs being the recipient of a well-timed offload from Considine whose strong carry punctured the home defence in the 58th minute. Ulster replied with a try out wide from Dublin University's Fiona Tuite, who made her debut for Ulster last week.

The ever-industrious Claire McLaughlin deservedly put her name to Ulster's bonus point try, the centre-turned-flanker powering over despite the best efforts of Considine and replacement Claire Keohane. Those concessions leave Guest in no doubt that further improvements are needed ahead of next Saturday's trip to Dublin.

"Some errors from the previous week were fixed today but we also need to make sure that we click, rather than missing 10 minutes here or there in a half," added the former Ireland international. "We're under no illusions again. Leinster are a very good side and I'd say there's going to be very little in it."