New Zealand were crowned champions of the Canada 7s and secured their spot at the Olympics, after a hard-fought 21-17 victory over Australia in the Cup final. 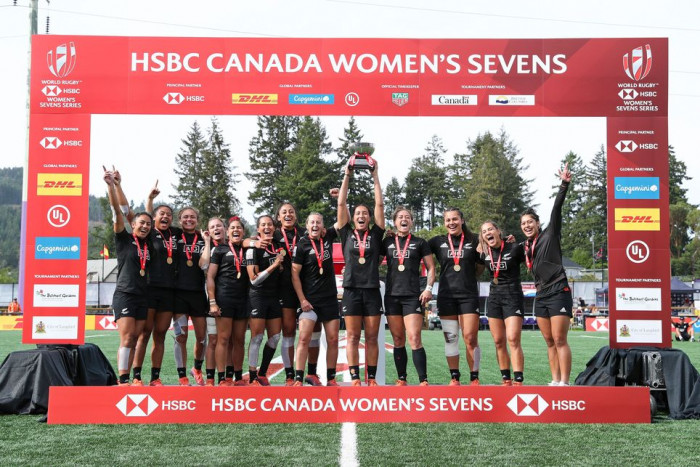 New Zealand now lead the standings with 92 points after their fourth title in five rounds, followed by USA (80), Canada (78) and Australia (74) with France now 14 points adrift of a coveted top four spot.

​After the mayhem of Kitakyushu, day one at Langford went largely with the seedings.

The first four games of the first round saw comfortable wins for Australia, Canada, New Zealand and England in Pools A and B, while France and the USA had to come from behind to beat Fiji and Spain.

Round two also went with seeding. New Zealand and Australia reached the quarter-finals with big wins over China and Brazil, and Canada and the USA were too strong for Ireland and Fiji. England joined them after narrow win over Russia, but the best game of the round was the all European battle between France and Spain, with the lead repeatedly changing hands. Eventually France went into the final play 19-12 ahead, only for Paula Requena to score two minutes after the hooter – but Patricia Garcia could not make the kick, and France reached the last eight 19-17.

England put in one of their best performances against New Zealand in recent years, but the Ferns just held out to win 12-10 and top Pool B, with Russia joining them and England after they had beaten China 33-12. Australia topped Pool A with a strong 29-14 win against Canada, but while Ireland beat Brazil 32-7 it was not a big enough win to win a quarter-final spot.

Fiji against Spain was effectively a direct knock-out game, with Spain coming from behind twice to steal the match, Paula Requena the hero again. USA rounded off the day with a 12-0 win over France.

Day two began with the quarter-finals, and an impressive performance by Spain against New Zealand. The Series champions were always ahead, but Spain hung in and with two minutes to go Maria Garcia broke free, shrugged off three tackles and score for Spain, pulling them within a single score of the Ferns. But the Ferns are not finished and Dhys Faleafaga​ ends a great move to give them a 17-7 win - a win that also guarantees them a place in the Tokyo Olympics.

This was followed by a classic CanAm battle, with the USA coming out on top 12-7. An Alex Kelter brace was the difference, either side of a classic Chaity Williams score, using her pace down the blindside of a Canadian scrum. But it's was the USA in a semi-final - again.

France had been shocked by England at the semi-final stage in Kitakyushu and made sure that there would be no repeat here. Tries frin Le Pesq, Drouin and Izar ​put Europe's top ranked sevens team firmly in command early on as France eventually ran out 26-12 winners.

Russia struck first against Australia through Khamidova, but Australia came straight back with tries from Sharni WIlliams, Ellia Green and Charlotte Caslick to wrest back control as they moved to a 31-12 win.

Down to the last four, with New Zealand drawn against the United States, and Australia against France.

New Zealand were too strong for a powerful USA side, beating them 12-26 in the end while France could not quite live with Australia, who raced into a 21-12 lead before winning it 26-19

And so to the final with Australia starting in the knowledge that they had not beaten NZ in well over a year but it was they who opened the scoring through Ellia Green in the corner.

Teenager Dhys Faleafaga shrugged off a tackle and flicked a pass over her shoulder to captain Sarah Hirini, who coasted over to hit back for NZ,  with Niall Williams grabbing the next.

Alicia Quirk and Charlotte Caslick combined well down the left before the latter had Emma Tonegato in support to finish off the move and cut the deficit to four at the break and keep the crowd on the edge of their seats.

New Zealand increased that lead when Hirini offloaded to Nathan-Wong, who handed off Emma Sykes to run under the posts to give herself an easy conversion, but Australia kept pushing for a way back into the game with Green intercepting Williams' long pass to grab her second of the final with barely 30 seconds to go. The restart was adjudged to have been knocked forward, though, and from the resulting scrum Kelly Brazier kicked the ball out to start the celebrations.