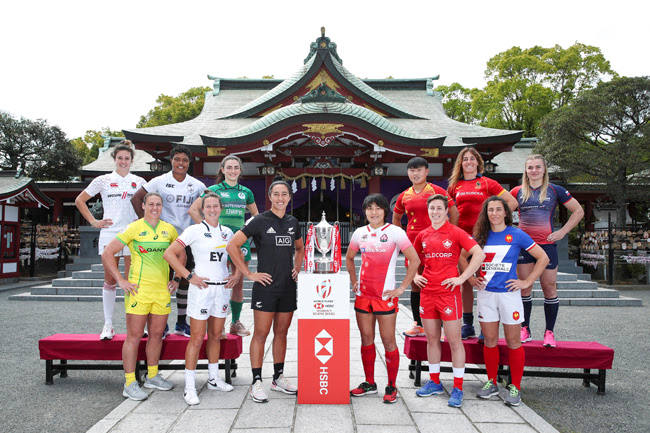 However, the way that all of the continent’s teams this season have failed to close the gap on New Zealand, Canada and Australia, while seeing the United States race past them, must be a concern if any of them have any hopes for Olympic medals next year. Certainly, short some unheard of losses of form, a podium finish in this season’s series seems out of the question even for France – currently Europe’s leading sevens team.

The quartet of New Zealand, the United States, Canada and Australia have been in a dominant league of their own this season, sharing all of the top three places in the first three rounds shared between them. Only France and Ireland have snuck in to steal one semi-final spot each, otherwise it has been North America and Australasia all the way.

Champions New Zealand hold a 32 point lead at the top, having not lost a game of seven since Sydney in 2018 – over a year ago. So the identity of the 2019 champions seems clear – and the Ferns will almost certainly lift the title in Langford, the next stop in the series after this weekend.

The battle for the other podium spots is rather more interesting with just two points separating the United States (48), Canada (46) and Australia (46). Each have one final and one bronze medal in their record, but the States have been slightly the most consistent, with three semi-final places. Australia and Canada are both in Pool B this weekend, so the outcome of their final Pool game could be crucial, with the loser destined to meet the Ferns in the semi-finals.

Spain and China also feature here with relegation the main concern. A Spanish win in their pool game – especially if it puts them in the last eight – should relieve any concerns they may have, but if China were to win it could pull Spain back into contention for the drop.

Pool A has some real interest too. The United States have been on magnificent form and should win the pool comfortably, but it is England and Ireland renewing their rivalry that will be most interesting as this may be a match-up that eventually decides the final spot in the Tokyo Olympics. The Irish had never beaten England until Sydney last year, but have barely looked back since, reaching the semi-finals last time and now stand as Europe’s second placed team, behind only France.  England, on the other hand, really have to start clawing the back the gap Ireland have opened.

The pool also includes Fiji, who beat England in the Challenge final and as a consequence may fancy their chances of a quarter-final spot this time.

Pool A will be won by New Zealand, so it is the opening game between France and Russia that will matter most. Japan complete the quartet as they try to recover from the disappointment of failing to win the Series qualifier. They are unlikely to trouble the rest of the pool.